The Week Behind: The Courage to Make Real Changes 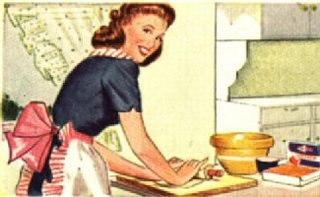 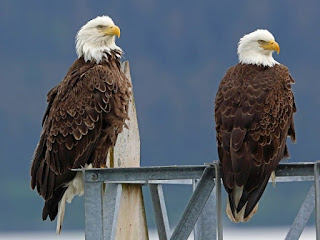 Nothing to really say about the rest of the day.  It was routine and nothing to it, but our date was definitely a nice one.
Wednesday:   Last Friday I'd noted that there was a flat grassy patch in the corner flower bed.  I hadn't paid much attention to it other than noting that I really needed to weed it.  This morning I went out before coffee...BEFORE coffee y'all!...to tend to that weedy patch.  Well with the rain and humidity that whole flower bed in front of the back porch was growing weeds and they had grown feet high, as in more than 12 inches!  I pulled and pulled and pulled weeds this morning.
It wasn't horribly humid at that time, about 8am, and overcast enough to be fairly cool, as well.  I listened to the Quail calling, Bob-Bob-Bob-White! and hearing the return call from across the field of another Quail.  Maddie wandered slowly down the flower bed with me, keeping me company.  Misty rain began to fall.   Maddie with her heavy fur coat couldn't possibly have felt that rain but she headed to the back porch anyway.   It was quiet and lovely and not a bad way to start a day.   I guess I was outside about 30 minutes this morning and while it wasn't as pleasant as walking the open areas, it does feel good to accomplish a task that obviously needs doing and that most certainly needed doing!
I wish you could see the HUGE blooms on my poor hydrangea. Oh well you can!  Here's a photo: 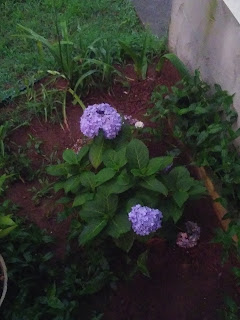 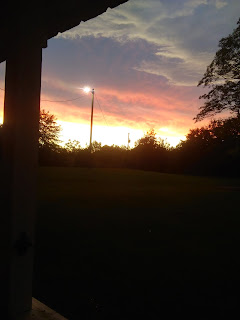 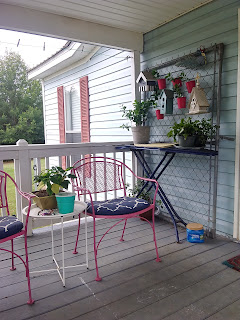 Friday:  So here we are nearly done with Friday.  I have been busy today yet again.   I had meant to start weeding under the Sweet Gum tree but my knee hurt and felt stiff and I know well enough going out to weed would mean a week of limping about no matter how much I rested it over the weekend.
The bananas we'd bought the other day were quite ripe.  The ones in the bag didn't have sugar spots yet, but I could tell they'd softened up, so I set three aside and we used one for our breakfast.  I kept it simple this morning, just making peanut butter toast from my homemade bread.

The bread was a week old today and I knew it would only get drier and drier.  I took the grater and grated it into crumbs.  I spread them on a cookie sheet and set them on the top of the stove to let them dry.
After breakfast I unloaded the big load of dishes I'd washed yesterday and put those away.  I reloaded with last night's few dishes and then put all the dishes from the picnic basket into the dishwasher as well.  With the dishes I added as the morning went on, I pretty much refilled that dishwasher.
I made banana chocolate chips muffins.  This is a favorite of ours of late.  I told John later I realized I'd completely forgotten to add an egg to the batter.  It doesn't seem to have affected the batter much.
I started a loaf of bread in the bread machine.  Then I mixed up a chocolate cake mix (expired in April, bought on sale in January) and while the layers rose a wee bit less than usual the cake turned out very tender and nice.   I frosted it with a chocolate butter cream frosting.
I'd planned to have leftover tuna casserole for dinner today, since I have to be out late this evening but John was less than enthusiastic.  I offered to make the fancy overpriced hot dogs that he wanted to buy at Publix.  I'm not keen on a sandwich for lunch and a sandwich for supper but some days it isn't worth the struggle to stick to my plan.
I washed a load of placemats, dishcloths, tablecloths, napkins this morning and hung all to dry on the line.
Well it's nearly time to go pick up Caleb so I'll end this week's post here.   Remember I'm taking a couple of weeks off.  It will be a busy weekend for us here.  I'll keep Caleb while Katie goes to get Taylor and then we'll go to Josh's birthday party.  On Sunday we'll go to church and keep Caleb while Katie takes Taylor back and then stops off to pick up a few groceries.  I have a feeling Monday will feel like a rest break.
Share what you've done this week to save or highlights of your week.
(C) Terri Cheney
Share Share on Facebook Tweet Tweet on Twitter Pin it Pin on Pinterest
Back to Feed