The Week Behind: Giving It My Best 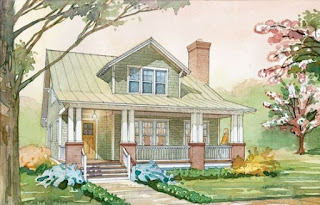 Saturday:  I slept as long as I needed to this morning and it was refreshing.  Breakfast was a simple one of toasted Banana Nut Bread spread with Peanut Butter.  I enjoyed that with my coffee and tea.
I had no real meal plans coming into this weekend beyond having determined that we'd thaw the 'Gramma's fried Chicken' for Taylor and I'd add in some chicken 'fillets' that are actually frozen tenders from Aldi.  That would save us needing to purchase extra chicken to feed us all on Sunday.
John got a call from Sam asking him to please come mow his grass as he'd gotten started and the mower broke down again.  Sam was anxious to get the pool up and in place for the boys but couldn't do it until the grass was mowed.  John was happy enough to go off to do it and I watched him go.  This past week he's been asked to do things with or for someone else three times.  I've enjoyed the wee bits of time alone at home to get in little jobs that have been niggling at me.
Typically we do no work on a Sabbath but we're relaxing our stance a little.  Today while John was off I went to work on refreshing my mantel and living room wall.  I've been dissatisfied with my living room for weeks now but couldn't find a thing in the shed to help freshen things up.  Having struck out at the Goodwill and not interested in paying higher prices for things that 'would do' elsewhere, I had to look at the living room all over again and determine to use what I have.  Well it turned out rather nice and while there are still a thing or three I'd love to change or do differently, it's a good start. 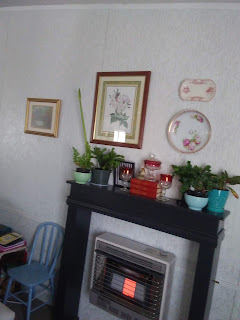 As you can tell by the heater being lit this was winter's mantel. I'm afraid it was not even this nice for spring/summer. 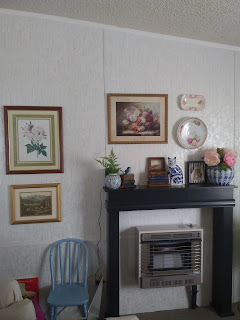 Nothing dire or dramatic but just a quick question and then a lot of chatter.  I started muffins while she talked to John and then settled to chat with her over my coffee.  Not a bad start to my day though the muffins went a tad long in the oven. 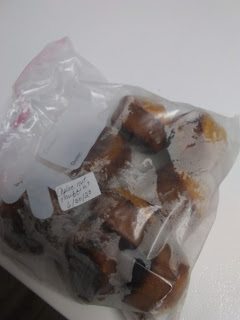 I still have half a jar of applesauce even after making muffins.  I think I'm going to make an applesauce snack cake and put it in the freezer but that will be for tomorrow as I've no desire to heat up the house in the afternoon.
I put 2 small pieces of frozen beef smoked sausage on to cook and slipped outdoors to plant chives, more zinnias, cosmos, columbine, and Bells of Ireland.   I meant to go back out and sprinkle them in but I guess this afternoon's rain settled them all in nicely.  It was nice outdoors at that early hour.  Warm, goodness yes, it was, but the quails were 'bob bob white' calling back and forth and the other birds were singing and it was just lovely.
Back in to have our breakfast.  The muffins were tasty and I put 8 into the freezer.
After I'd done a few household tasks, I mixed up the potato doughnut dough.  It's a very soft dough overall, or at least mine was.  I am sure part of the reason was that my butter was more melted than softened.  I only have a six doughnut pan and the ones in it turned out gorgeous but in the interest of hurrying along with oven use, I put the rest on a baking sheet.  They look a bit deflated.  And the doughnut holes look like tiny biscuits.  Never mind the looks, they taste just lovely though baked doughnuts do not have the power to adhere sugar to themselves.  I'll have to glaze them or dip in butter and sprinkle with cinnamon sugar.  We opted for plain ones this morning when we sampled.  I had 18 doughnuts and 18 holes.  I put six in the fridge for us and 16 doughnuts and 18 holes in the freezer. 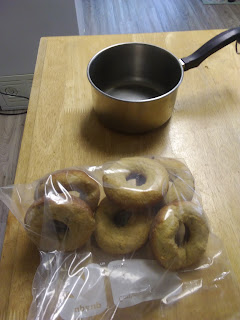