The Last Day of June

by admin June 30, 2020
My stove top and I did not get along very well yesterday, and while I'd love to blame it on the appliance, unfortunately, I have no one to blame but myself. To begin with, while cleaning the glass top with the fantastic cleaner Nancy bought for me, apparently, I locked the cooktop. Now that may not sound like a big deal to you, but it is a way big deal to me as I use the range multiple times daily. In fact, the oven was still warm from a batch of some seriously yummy Banana Nut Muffins I'd made first thing in the morning. No matter how many times I tapped the pad, nothing would respond, so I did what we all do, (or so I thought), turned off the breaker to reset the digital display. After there was no change, I called Whirlpool, holding for nearly 40 minutes before I was able to speak with someone. As an aside, we still have our house phone and this instance is one reason why. It is so much easier to hold a larger phone on your shoulder while performing other tasks! Anyway, after putting on the clean sheets and other chores while waiting, a "representative" finally came on the phone. Except she was no help at all. Summoning all of the Christian charity I possess, I did not lose my temper, although I will admit it was a struggle. I called another number I had and this time there was very little wait and the woman proved helpful. Here is where my stupidity comes into play. A few days ago the microwave went a little haywire and Bruce flipped the breaker for a reset, mentioning it was breaker #5. Clever readers will have already deduced that breaker #5 does control the microwave but it has no bearing on the range whatsoever. Need I say more?
Later on, after using said cooktop for dinner, and making a slight mess of it, like a complete idiot I ran my hand over the HOT burner!!! I wish I know what I was thinking! The result was three fingers feeling as if they were on fire! "Bruce, ask Siri what to do for a burn quick!" In the meantime I'd remembered that butter was supposed to help, and since there was some melted butter in Bruce's corn on the cob holder waiting to be washed, I slathered my fingers in butter. No relief. Another idea was toothpaste, so I ran to the bathroom, squirting some on my fingers and giving them a good rub in. Don't try that one as it was messy, and did nothing. Eventually he came to the part of the list which mentioned black tea. Well, on that same counter with the corn holder, there happened to be about a half cup of my breakfast tea, so I jammed my fingers in that. Ahhh...after adding another tea bag, I kept my hand in there for some time and if you can imagine, not only did it bring some relief, my fingers are fit as a fiddle today! I even walked down to the mailbox after my soaking, coming out of the door I found the sky to be a balm for the soul. 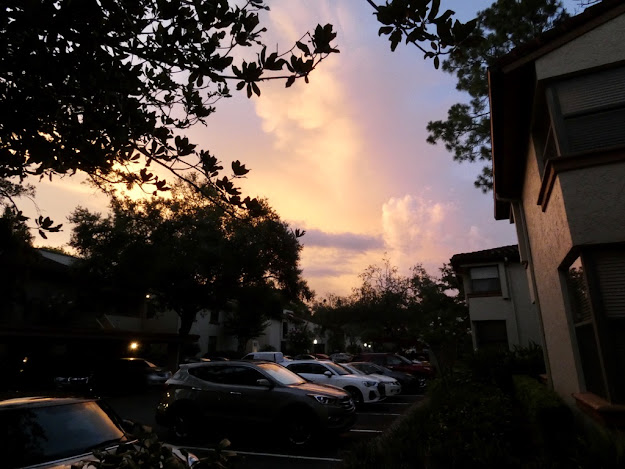 Speaking of the sky, the whole promise of amazing sunrises and sets being fantastic with the dust storm. was a bust. Mostly, for the past four days or so, not counting today when the sky turned blue again, the sky was what I can only describe as a blank, neither blue, nor gray. Temperatures soared to 97 degrees! I did go out that first morning for sunrise, and it was pretty interesting that I could stare at the rising sun, maybe as if I were wearing sunglasses when I was not? 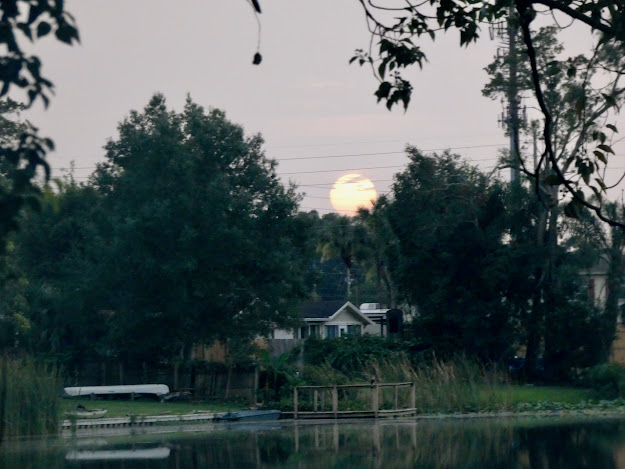 Before long the clouds began to obscure the view, but it still felt pretty neat seeing it as a ball. 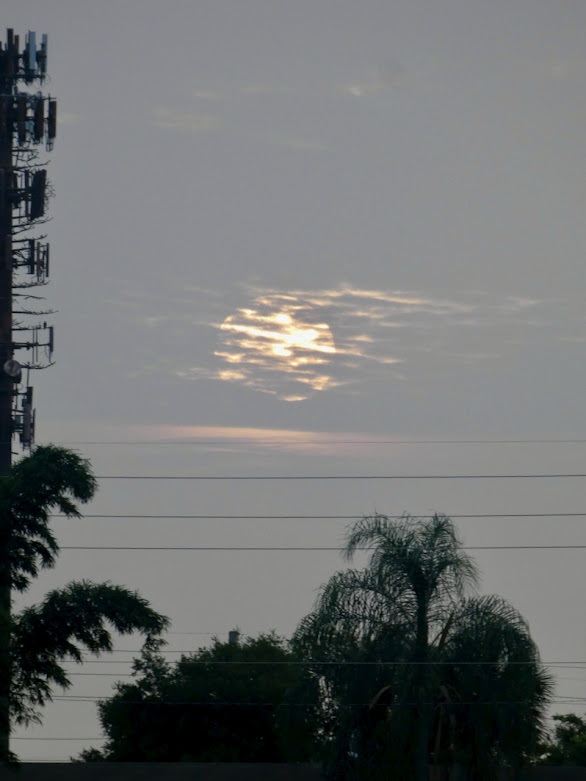 Am I ever grateful to have such easy access to both the daily celestial activity.!
Sunday morning, about 7:30, while Bruce went fishing, catching one on his second cast I might add, I bit the bullet and went to Publix for a serious grocery shop. Thankfully, very few other folks decided to do the same, so most of the time there was no one in my aisle. Normally I use the closet in our tiny "hallway" as an overflow pantry and the pickings were getting mighty slim. So, like in days of yore, I shopped every aisle and we are now good. 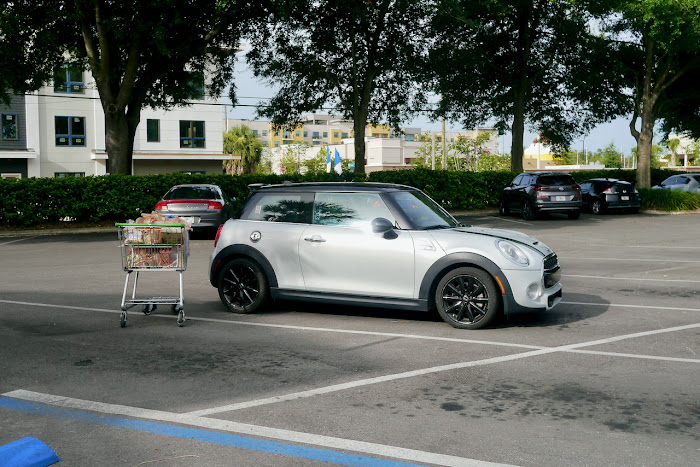 With so few cars, I even got my favorite parking spot! Years ago I decided to park on the last row of spaces every time, so I would never have to leave the store and wonder where my car was. Imagine when I get really old! Will I even remember this easy info? Let us hope so.
Rarely do I buy produce at Publix, in part because I like to pick out my own, and while they have more like that then before, it still does not measure up to Clemons. Recently we learned from them that farmers planted less due to the excess they had in the early days of the pandemic, thus there will be shortages and higher prices. Count everyone unsurprised because this is 2020 after all! This morning I was so delighted to find some Rainier cherries in stock, and while at $4.99 a pound they are expensive, in this instance, they are so good I did not even mind. 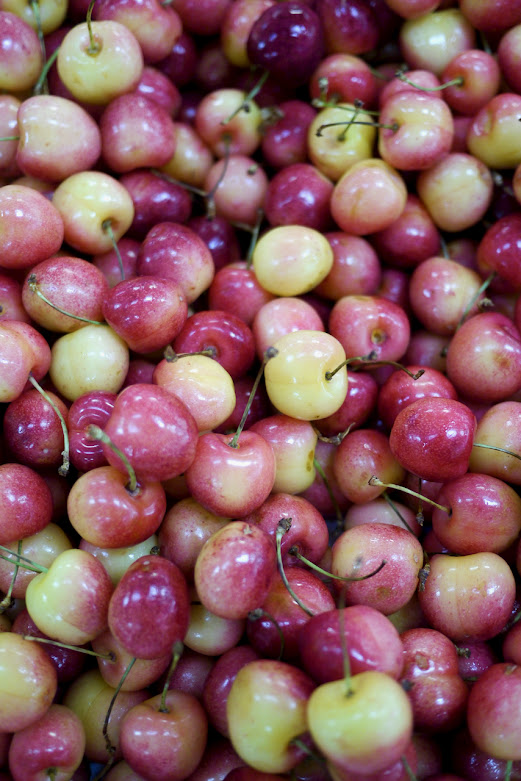 Because it has been so blasted hot, staying inside is the order of the day, affording me plenty of time to work on a puzzle. Don't judge me when I say I spent countless hours working on this one! I'm finding them somewhat addictive if you want to know the truth. Even though I could never figure out what I had wrong on the sky portion,  I'm one of those folks that is oftentimes happy with "good enough." I'm married to a perfectionist, so one in the family is plenty sufficient. 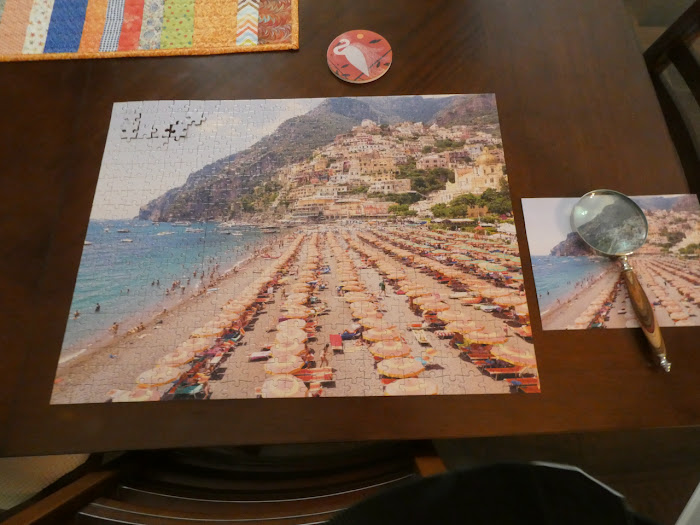 I saved the umbrellas for last thinking it was the hardest part, but those hillside villas sure gave them a run for their money!
I have no idea what the beautiful blooming trees, jam packed with bright yellow flowers are, but while driving home from Clemons, seeing this scene, I had to pull over for a shot. I wonder what it is like walking on that yellow driveway? 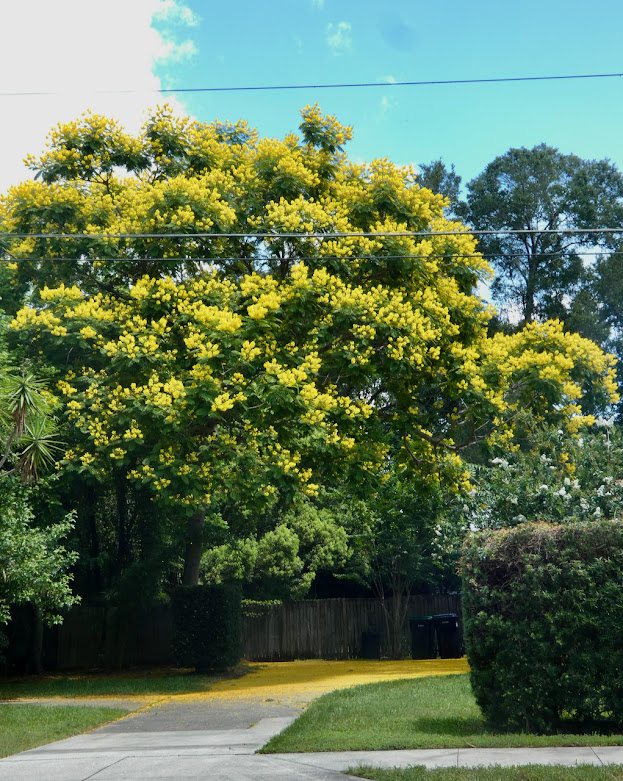 Which reminds me, we watched, Rocketman the other night and was it ever a strange, and somewhat wonderful film. We so loved Elton John when we were young that we named a Siamese kitten, Bennie! My takeaway from that film? I'm super glad I am not a superstar and am happy as a clam as a nobody.
My owl has not come around for the last few days, so let's have some owl love in this post, using one of last week's photos you have not seen. 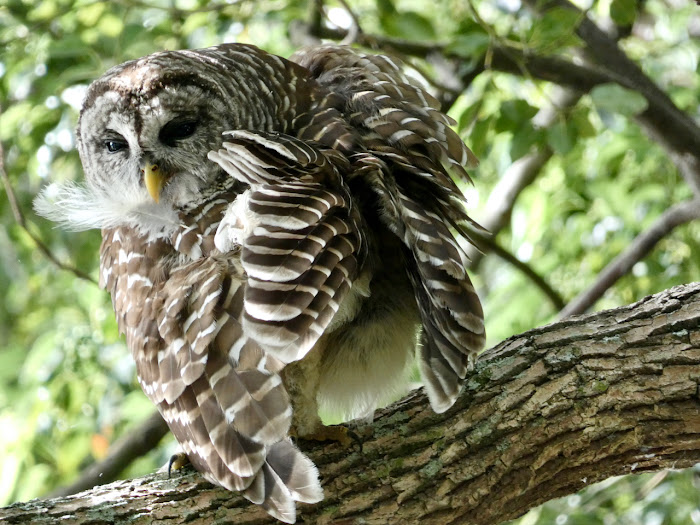 This morning, in spite of the heat, we went to the courts to practice a little pickleball where we saw two things of note. I'd brought along my camera because on several occasions I'd seen the American Kestral on the power pole and I was hoping the same would happen today. Indeed, it did, and as soon as I spotted it, I put my paddle down to get a shot. For me actually, because if it is in this space, it will be easier for me to find again. So small it is hard to believe it is in the same family as Mr. Plump Owl above. 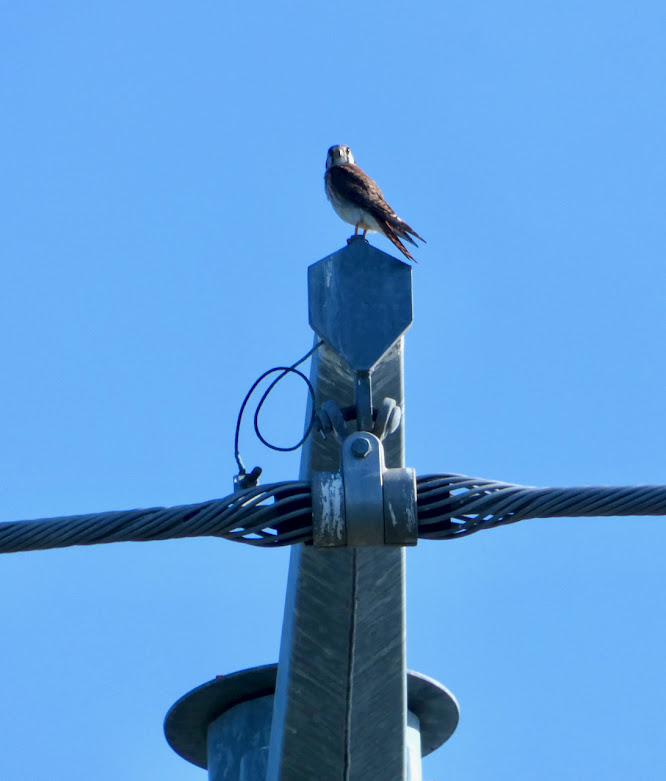