by admin June 21, 2020
"The blow felt by a globalized, just-in-time, cheap-energy driven, modern consumer economy will be inescapable." 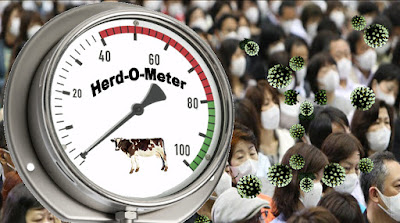 Most of us raised in Western cultures in the second half of the 20th century and the first quarter of the 21st suffer at least a mild form of attention deficit disorder.

Maybe our epigenetically adaptive neurobiology began to mutate with home electrification and the effect of night lighting on our circadian rhythms. Likely it accelerated with the arrival of television, the personal computer, and smartphones. A modern child, whether in Brussels, Chengdu, Harare, or Almaty, is now a cyberamphian — half biophysical, half virtual. Algorithms pattern our experience of the world the way buzzing flies and the smell of animal manures lent texture to the world of our ancestors.

The circadian rhythms of viruses haven’t changed. If a pandemic strikes when we are only half attentive to the physical world, how do we imagine we will respond? Firstly, we’ll see it as an annoyance. It was not in the script we have trained so well to execute. Then, we’ll see it as tedious, dumb, beneath us. Our attention spans have atrophied, our interests specialized, our knowledge Googlized. While once a griot would devote his youth to memorizing hundreds of stanzas of sagas, now we can only listen to a new song for a week or two and then need to move it off the charts and replace it with something more current. What made headlines an hour ago has become stale. Refresh the screen to update the feed. We demand not better, just newer.

During most of the earlier plagues we were living in less complicated arrangements, and during the Space Age our plagues have been, thankfully, less virulent or widespread, or subject to early technological intervention: polio, measles, mumps. That has lulled us into unwarranted complacency. We assume a vaccine will arrive any day now, or that herd immunity will set in before long. Our truncated attention span makes us impatient. Quarantines, masks, and lock-downs are anathema.

Herd immunity is a cruel mistress. Whether by vaccination or by recovery with hard-won antigens coursing through our veins, viral annihilation for SARS-CoV-2 requires 70–80% population immunity (it is different for each virus). The herd-o-meter presently stands at less than 1%. For the world to eradicate Covid-19 by this means, 5 to 6 billion people will have to either be vaccinated or get the disease. If the case fatality rate is 3–4%, and no vaccine is forthcoming, 180 to 250 million people will die before the herd-o-meter reaches the green zone where the virus fades into dormancy for lack of susceptible hosts.

Making a retrovirus vaccine is challenging, although some promising trials are underway. SARS-CoV-2 is like HIV-AIDS — a single strand RNA virus rather than the double-stranded DNA virus you would find in, say, Hepatitis-B. The significance is that when the RNA code transfers to the genome of the host cell, there is no fact-checker looking for errors in coding as occurs with DNA replication requiring reverse transcriptase and integrase. RNA transfer errors are common. Thus we see CoV-2 mutating into a new version of itself in almost every city it visits. Will antigens that combat the virus in Japan also combat the versions that arose in Brazil? Will the July version of the vaccine still work in August? When you need to vaccinate 6 billion people to exterminate the outbreak, these questions are not insignificant.

Given all that, it is not difficult to predict the course of the pandemic over the next few months, if not years. It only amazes me that more bobblehead commentators in mainstream media are not doing this. Do they so fear a ratings crash if they report bad news?

Business prognosticators are divided. Stocks have been soaring on the (false) expectation economies will soon recover. Then the Fed Chief (optimistically) opined the economy could stay in a slump until 2023 and the market crashed. Later it rebounded. The Fed had been forgotten.

Bear in mind that after the Crash of ’29 the stock market recovered for 5 months. Investors piled into the market again, snapping up bargains. But then in April 1930, the market turned down for real, losing 86% of its value, much more than the 1929 crash. Last week saw the biggest one day drop in the Dow Industrials since the WHO declaration of pandemic in March, but not all investors are persuaded.

Countries like China, Taiwan, and Korea, which made some missteps early on but quickly corrected and got ahead of Covid-19, flattening their curves of infection and contact tracing new outbreaks, will acclimatize to the new normal and build beta versions of post-pandemic societies. They will keep playing whack-a-mole with every new case. Masks and social distancing will be permanent features until the whole world has eradicated the disease.

By contrast, countries like the US and UK, which ignored epidemiologists’ warnings far too long, and are exuberantly returning to a minimally modified version of the old normal as if the pandemic were winding down, will rudely reawaken, once again too late. Expect to see many hastily constructed morgues, mass cremations, and town criers ringing bells in the streets, shouting “Bring out your dead!” For the US, a 70% infection rate is 224 million. A 3% case fatality rate (it goes higher if hospitals are overwhelmed but lower if better therapies are developed and disseminated) is 6.7 million. To me, six million dead seems entirely plausible given the exponential curve we have witnessed already and the knowledge that nearly half of the U.S. population was expected, even before all the gyms closed, to be obese by 2030. Obesity is a greater risk factor for hospitalization among Covid-19 patients than heart failure, smoking, diabetes, or chronic kidney disease. Of the critically ill in China, 88.24% of patients who died had obesity versus an obesity rate of 18.95% in survivors.

Of course, the financial blow felt by a globalized, just-in-time, cheap-energy driven, modern consumer economy will be inescapable, even by stay-at-home ecovillagers like me. Fitch Ratings said in a new report that across all industry sectors the economic pandemic is set to destroy $5 trillion. The International Air Transport Association predicted airlines will lose $100 billion, assuming they reopen by fall. That compares with $31 billion during the 2008–2009 recession. No airlines, no tourism. No tourism, no principal industry for a large number of (mainly small) countries.

With workforces decimated by the virus or forced to stay home, what becomes of maintenance required for nuclear power and weapons? What becomes of toxic legacies seeping towards water supplies that had been awaiting cleanup? Aging dams? Sinking coastal cities? What happens to the climate time bomb that scientists have told us can only be defused by active CO2 removal; that halting emissions won’t save us from?

Drilling Down - The Gulf Oil Debacle and Our Energy Dilemma | Joseph A. Tainter | Springer
For more than a century, oil has been the engine of growth for a society that delivers an unprecedented standard of…www.springer.com

In Drilling Down: The Gulf Oil Debacle and Our Energy Dilemma, Joseph Tainter and Tad Patzek describe the lifestyle of a wealthy family in ancient Rome. Work, such as it was, ended by mid-day and afternoons were spent at the baths, evenings in social banquets. The diet was well-balanced, children well-educated, and all of it was accomplished with about 6 slaves per family. The Tawantinsuyu (Inca) were even more efficient, their whole pre-Columbian society spending about 65 days per year to meet basic needs. Slavery, while not unknown in the Andes, played a much smaller — principally military — role.

Our “norm” now is to use 400 energy slaves per USAnian family, or 200 in Europe and 40 in China. Moreover, those slaves are actually much more reliable than human slaves ever were. They work 24/7, never get sick, don’t get married and have children or entanglements, and require almost no space for housing. Right now they cost much less to acquire and maintain than human slaves ever did.

So, if the Tawantinsuyu could get by with almost no domestic slaves, the Romans with only a handful per wealthy family, how is it that USAnians need 36 billion of them to take kids to tennis practice and pop popcorn? Tainter and Patzek say it in a single word: complexity.

We have become inured to complexity. Today we can barely fathom getting around in a strange city without a smartphone. Before Covid, we thought nothing of flying a thousand miles for a business meeting or a week at the beach. This energy-enslaved world is our insular cocoon, the norm that we have been socialized into, and with confirmatory bias and normalcy bias we defend it from any “abnormal” opinion that it is immoral, wrongheaded, or doomerist. We do not imagine our slaves could make us unhappy or unhealthy. Quite the opposite. We confer on our outsized, outmoded, profligate lifestyle an absolute, inviolate authoritativeness. We are the crown of creation.

This is the mindset that keeps the majority of us frozen in the headlights as collapse rushes at us from all sides — militarily, environmentally, financially, and socially. We are Romans with the barbarians at the gates — we just keep sending our slaves out to pick more fruit and bring us wine. Addiction to slavery is the same as any other addiction. First it feels good, then it destroys you. Just ask a wealthy Roman.

Many students’ recurring nightmares involve a final exam tomorrow for a course they seldom attended all term: They can’t remember where the classroom is, and barely studied for the exam. Unfortunately, that nightmare describes humanity’s situation for the coming climate change final exam. While the stakes for flunking the Covid-19 quiz have been crushing — over 425,000 people dead globally by mid-June, economies crippled, and an as-yet unrealized catastrophe looming for many nations in the developing world — the cost of failing our inevitable collective climate change final exam will be apocalyptic for civilization.

When the ice sheets of Greenland and Antarctica melt, the forests of the Amazon transition to scrubland, and vast swaths of once-fertile land become inhospitable desert, there will be no climate change vaccine that will suddenly bring an end to these essentially irreversible catastrophes. Tens of millions will starve. Wars will break out over scarce resources. Hundreds of millions of climate change refugees will flee rising seas, coasts will be ravaged by stronger storms, and desert-like lands will be without the food and water needed to sustain civilization.

What is the way out?

Stay at home. If you must go out, wear a burka. Garden. Make biochar and add it to your compost. Wish I could tell you more, but this is a start. Look! Your attention span is already improving.

Help me get my blog posted every week. All Patreon donations and Blogger subscriptions are needed and welcomed. You are how we make this happen. PowerUp! donors on Patreon get an autographed book off each first press run. My latest book, Dark Side of the Ocean, is nearing that moment. Please help if you can. Donations are tax-deductible.