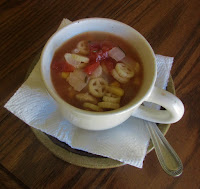 A couple weeks ago I found a WW recipe for Super-Easy Chicken Noodle Soup that I printed off. It has lain on the table staring at me since then.  I've read the recipe a few times and knew that I had ingredients on hand, not the exact frozen veggies, but enough to make a creditable facsimile.  Today I made it.  Chicken breast, frozen corn, onion (lots of onion), small pasta, chicken broth, diced tomatoes, chives, salt and pepper.  Oh, the onion is sauteed in a bit of butter and, let me tell you, I could smell that butter and onions all afternoon.  Yum.  It's pretty good soup, it could use a bit of thyme or another herb to jazz it up, but it won't go to waste. 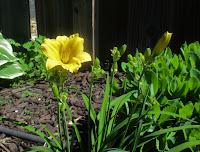 I was happy to see the first flower on the Stella d'Oro daylilies this morning.  I planted them all across the top of the retaining wall last August (they were year-end closeouts at Meijer) and they're starting to bloom.  I can't wait until they all are flowering, maybe not this year, but next year for sure. 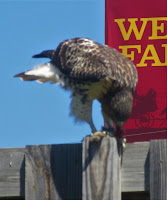 When I walked up the hill to take the flower picture I heard the rustle of feathers and looked up to see the Red-tailed Hawk back on top of the fence.  It was right where I was headed so it fluttered down the fence a bit, giving me a dirty look.  About half an hour later I heard it call and then it flew up to the top of the fence with its lunch in its talons.  I was having my soup at that time so I had lunch with a young hawk today. 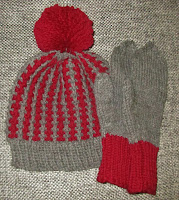 This afternoon I finished the second mitten for the charity auction in the fall and I am happy to report that the mittens match.  I thought I'd discovered a new facet of the app I use to keep track of rows but I misunderstood and lost all the numbers from mitten number one.  (Did I tell you this before?)  Anyway, I counted and compared and measured, and managed to make a matching mitten.  I'm so proud.

Once the mitten was done all I had to knit on is another washcloth.  I must be getting arthritis in my hands or something because lately knitting has made my hands ache.  I don't like it.  Writing  hurts too.  Arrrgh.

14 June--Barbara Malcolm, Tropical Obsession.
Mona could not bear to be in the villa with Jack pacing up and down and muttering threats.  He and Manning had a huge argument the night before when Jack had asked to be bought out of his share.  He told Manning that he thought that three weeks was more than enough time for him and Santiago to find something more than the piece of railing and a couple of piles of metal whatever it was that had solidified into a clump.  Manning had tried to convince him that the clumps might be coins, but Jack would not listen.  Jack had spent hours on the internet, had even sent to the States for a new, high speed laptop so he could do online research.  When he had trouble even finding a reference to any treasure shipping or shipwrecks this far south in the Caribbean, he began to suspect he had been had.
He invited Manning over for supper one night a week ago and asked Yana to make a special meal and that is when Mona knew that Jack was setting a trap.  She tried to get Jack to share his ideas with her, but he just pushed her aside, telling her that she was better off going to Art League with Susan.  One day he even gave her two thousand dollars and told her to go shopping and not come back until she had spent it all.  She looked at the money in her hand and thought that unless she bought jewelry and big jewelry at that, it would take her a long time to spend two-grand in one day.  But she was willing to try.


Today I folded all, well, almost all of the laundry I did the other day.  The sheets are still in the dryer but I'll go fold them soon.  Maybe tomorrow.  I'm tickled that the young hawk has adopted my fence for a perch.  I want to go pet it but don't think that would work.  It's young enough that it isn't too skittish around me, it just moves away to preserve its comfort distance.  Hey, I'm social distancing with a hawk.  Cool.  Oh, and Happy Flag Day!
--Barbara
Share Share on Facebook Tweet Tweet on Twitter Pin it Pin on Pinterest
Back to Feed