Is any dress code likely to strike as much fear into even the most sartorially self-confident of men as smart casual? Reading that horribly nebulous phrase on an invitation is to enter a whole world of confusion. Following George Orwell’s ‘doublethink’ – the ability to hold two contradictory thoughts in one’s mind at the same time – to be smart and to be casual simultaneously does not sit comfortably.

It would be much simpler for all concerned if those suggesting this dress – something of a panicky cop-out on their part, implying as it does that you should dress up, but not too much, be comfortable, but not entirely – reverted to that which was once clearly understood: the distinction between formal dress and, well, everything else.

Indeed, consult the historic etiquette guide Debrett’s – apparently for people who still dress differently depending on whether they’re in the town or the country – and it cuts the cake in even finer slices: smart casual becomes “formal smart casual” and “informal smart casual”.

The former requires the wearing of a good quality sports jacket or blazer, trousers other than jeans, a shirt with a collar, and shoes that are not sneakers or sandals. Ties are not required.

The latter, “informal smart casual”, allows jeans back into the fold – as long as they’re clean, dark and not distressed – and throws in the option of wearing a polo shirt rather than a traditionally collared shirt. “Just because an event is informal it is not synonymous with making no effort,” as Debrett’s has it.

Think of it as conventional clothing of the kind you’d wear to meet your prospective mother-in-law for the first time. It’s been considered, but you’re not dressed as though you’re actually about to get married.

If this sounds familiar, that is because “informal smart casual” as defined above is rather the norm these days. As it happens, men’s style has shifted as if to accommodate smart casual, as formality and “casuality” have become increasingly blurred. The Beat poet Jack Kerouac once noted that he felt required by the norms of his time to wear a blazer and tie for official publicity stills, though in his personal life dressed much more at ease in sportswear and military surplus. This was a time when perceptions of what was cool were beginning to be formed on the street and filter up, not trickle down from further up the typically formally-attired social ladder.

Casualwear today represents a new dynamic – that of a hybrid style that perfectly suits smart casual. This shift has meant that casual is now defined more by the details in men’s clothing than by the obvious visual cues and stereotypes of the past.

Casual clothes fit well, they don’t hang off the body. The silhouettes that perhaps distinguished formal attire are no longer owned by it. Casual clothes still hold a clean line, but do so without the use of stuffing. Shirt collars are more likely to have an unlined collar, a jacket be unlined and unconstructed, while a tie – worn because one wants to, not because one has to – might be slim and knitted, rather than fat and glossy.

Officially each garment fits easily within the pantheon of smart casual; but each is now easier to wear.

Here’s a cheat sheet of modern smart casual pieces that can be easily mixed and matched both together and with other garments in your current wardrobe. 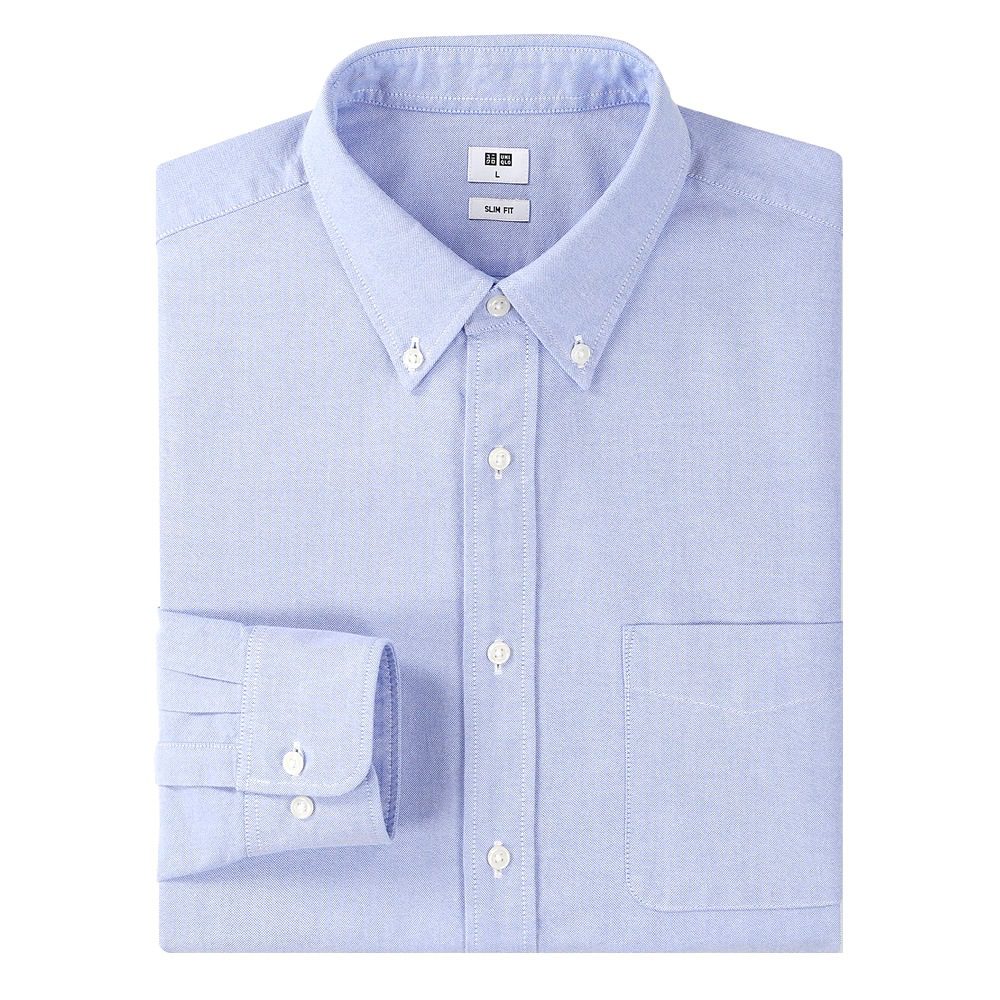 If there is one article of dress that embodies the very essence of smart casual, it’s undoubtedly the Oxford shirt. Sharp and clean, yet relaxed and comfortable, it’s a staple piece that straddles the line between formal and informal with masterful precision.

This sartorial balance makes the Oxford shirt a powerful and versatile ally when it comes to piecing together smart casual outfits. The thick, subtly textured fabric provides a means of dressing down more formal pieces, like a tailored jacket or dress pants, while the clean lines and collar can lend a sense of purpose to casual pieces when worn in place of a T-shirt. 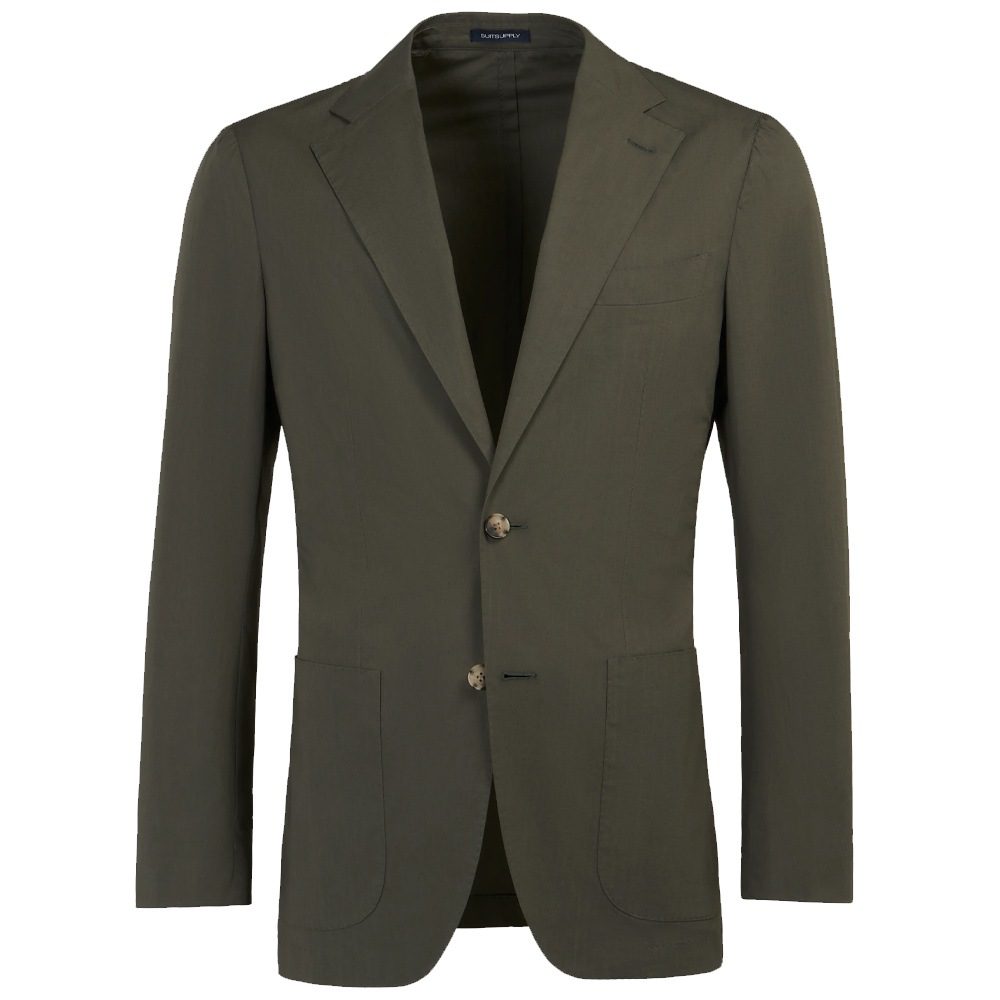 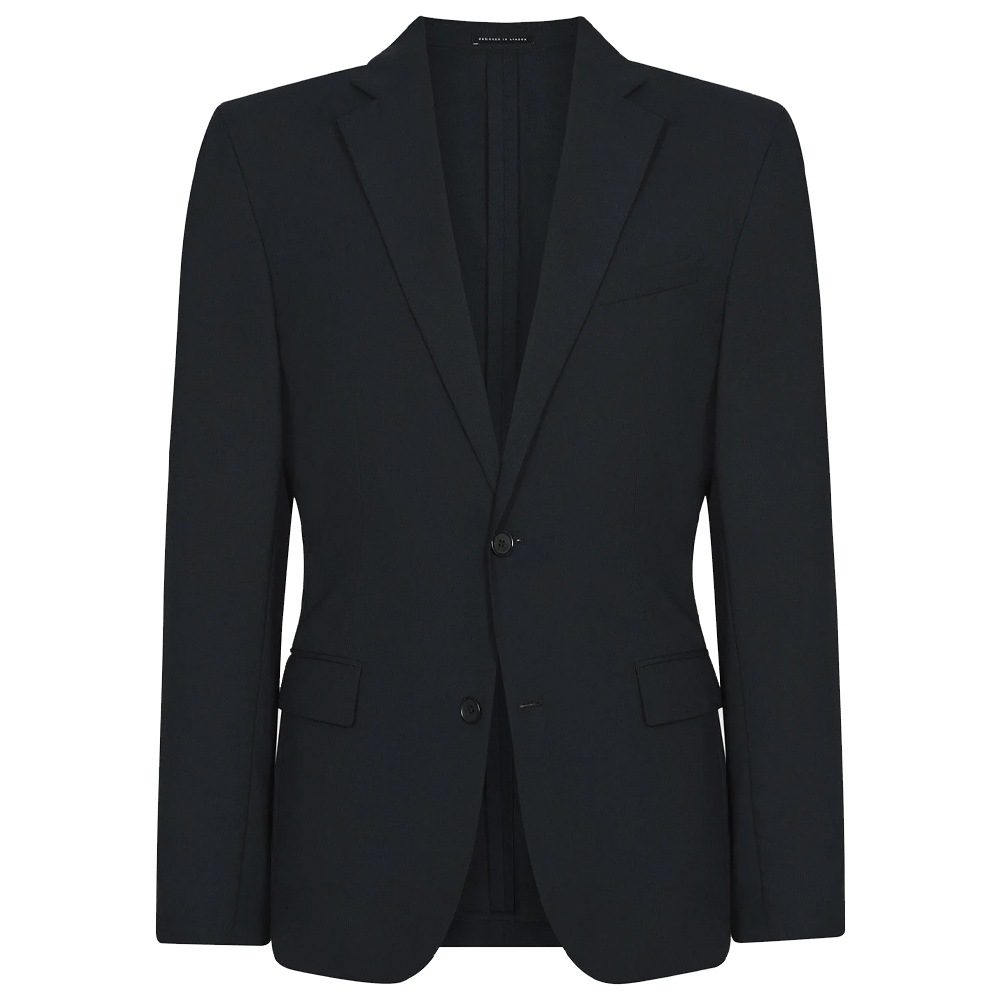 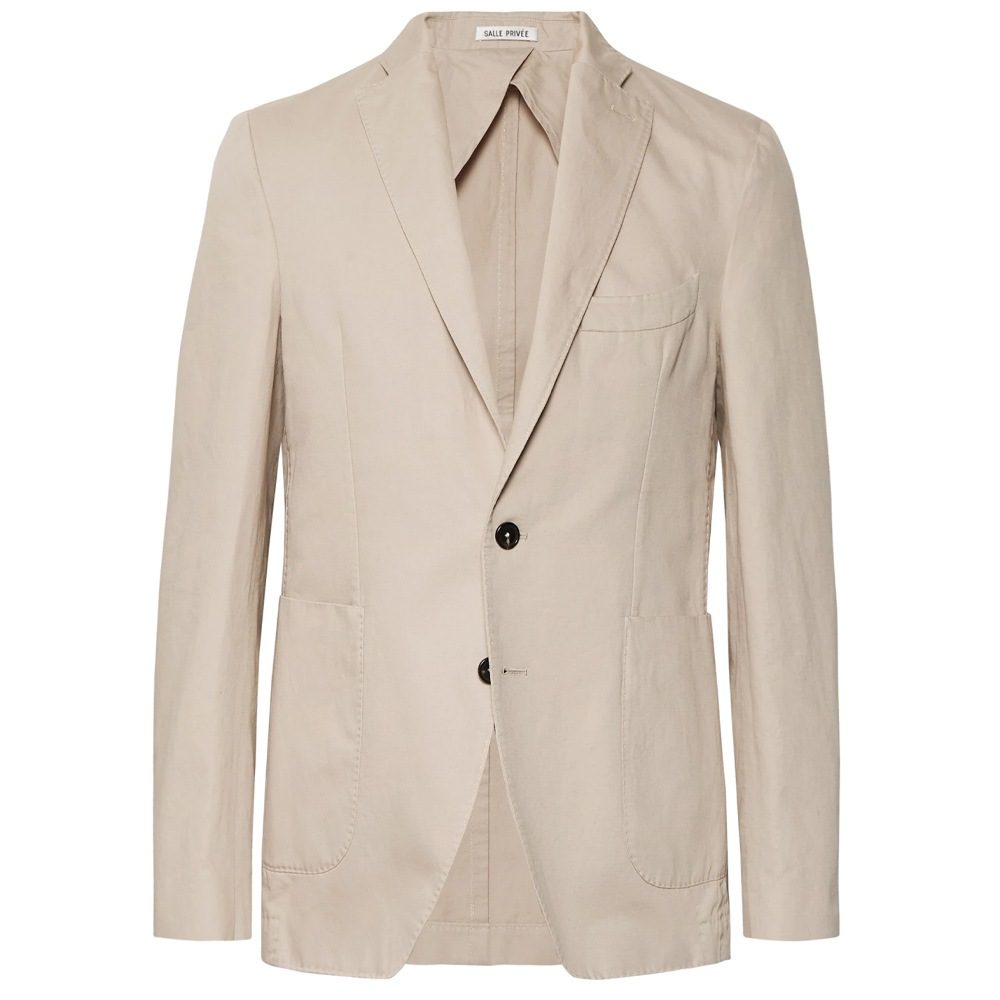 If out-and-out tailoring is considered formal and a casual overshirt is considered informal then an unstructured blazer bridges the expansive grey area separating the two. With its soft lines and relaxed drape, it’s the perfect antidote to an overly uptight, shoulder-padded jacket and a smart casual must-own for sure.

A conventional tailored jacket’s angular silhouette and fitted design are at odds with most types of smart casual legwear. Combining one with, say, a pair of chinos or slim-fit jeans can create a jarring structural contrast between top and bottom which is a big sartorial faux pas. The relaxed styling of an unstructured blazer negates this issue entirely, creating a sense of cohesion throughout. 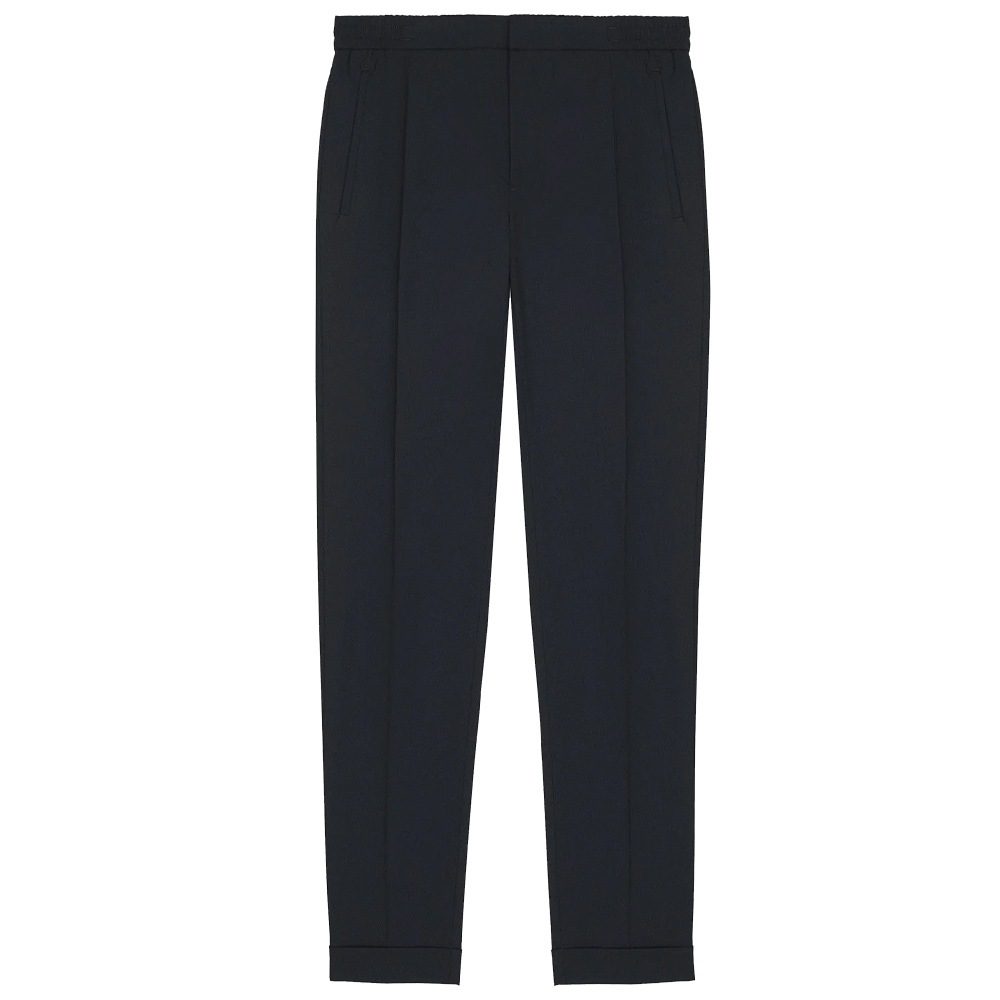 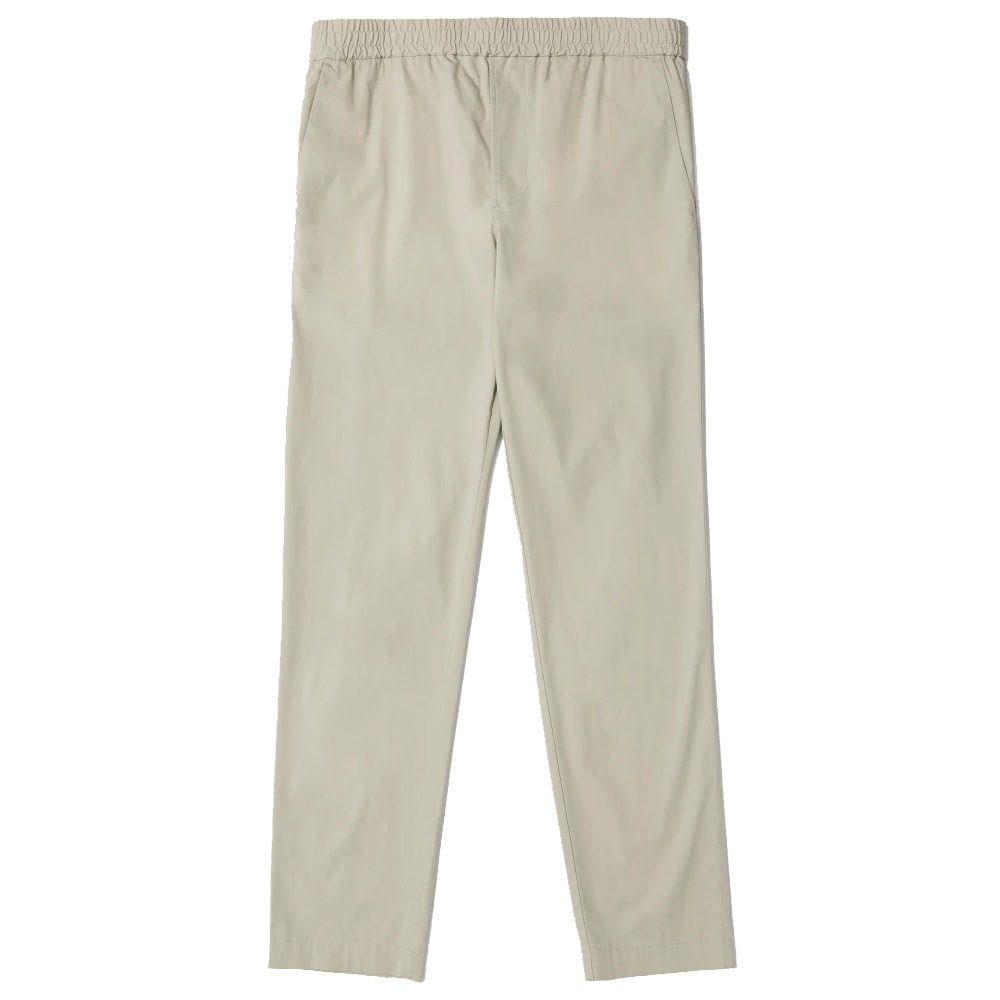 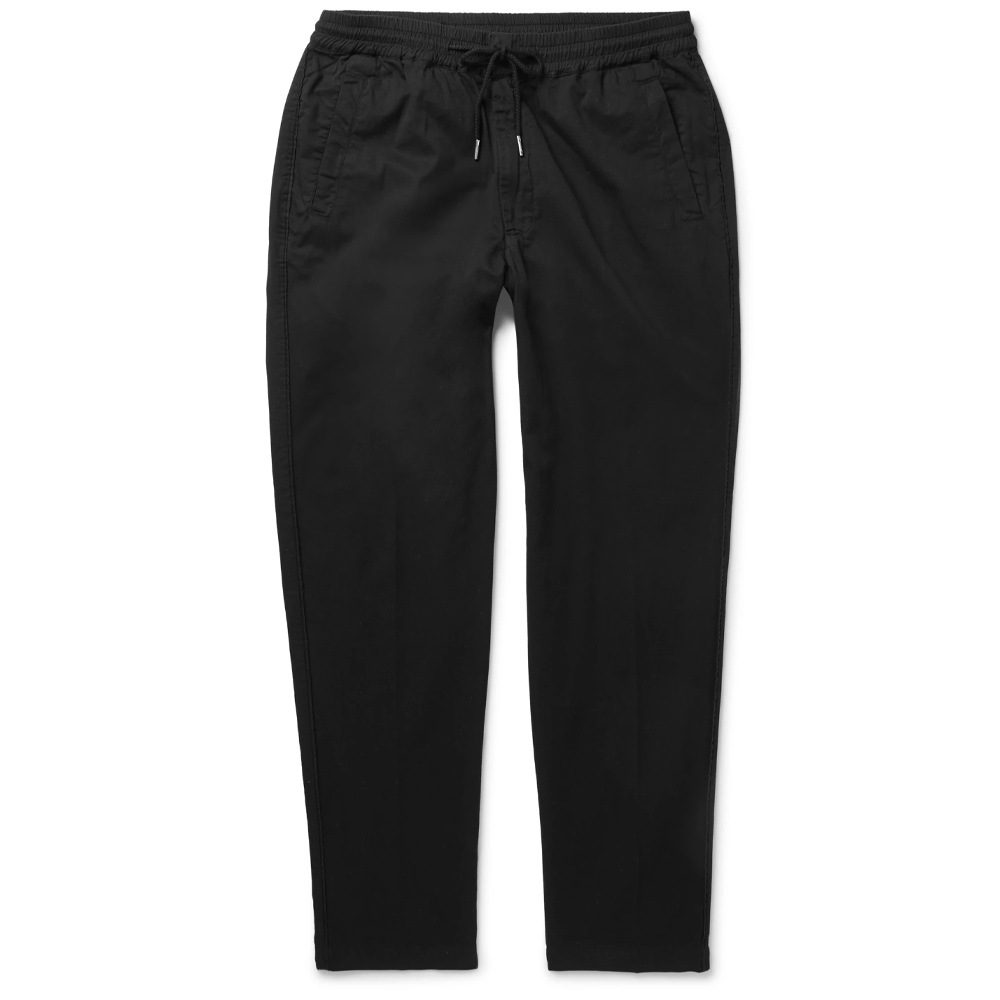 Wearing trousers with a drawstring waist anywhere other than the gym or the comfort of your own sofa used to be a good way to single yourself out as a sartorial pariah. Today things are a little different and a new breed of cross-pollinated legwear has fused comfort and class to bring us something that feels like jogging bottoms but looks more like dress pants.

Call them tailored sweatpants, call them whatever you like, but these drawstring bottoms have taken the modern smart casual wardrobe by storm and in terms of looks and versatility it’s not hard to see why. 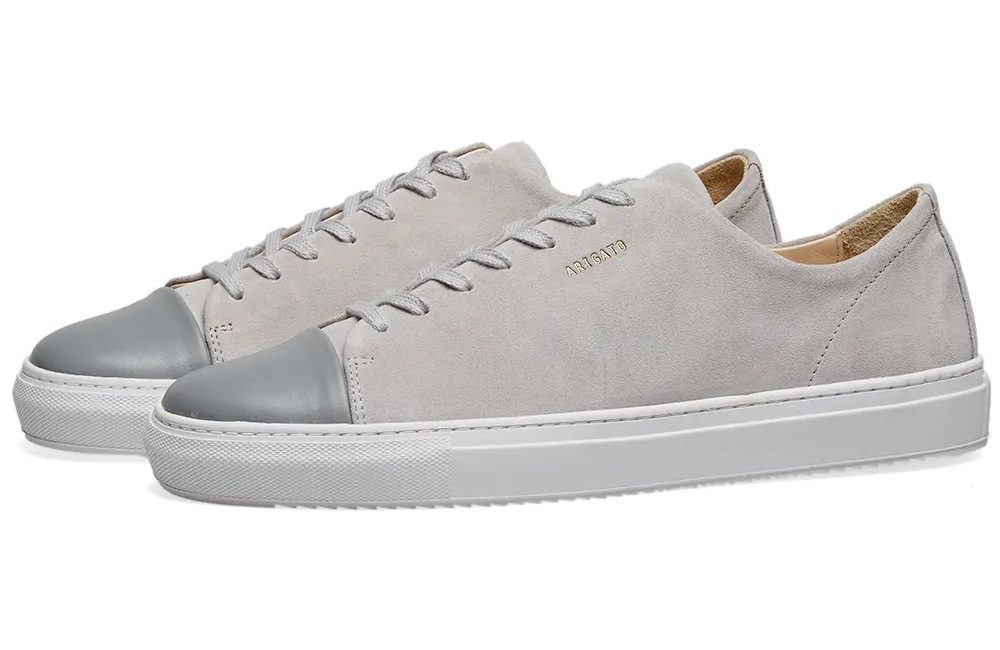 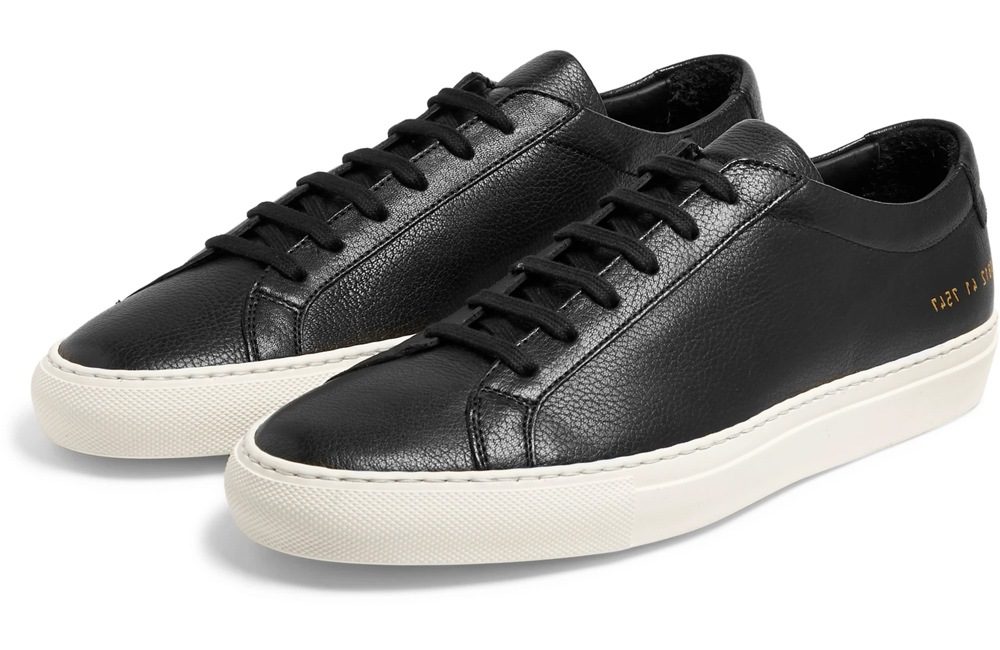 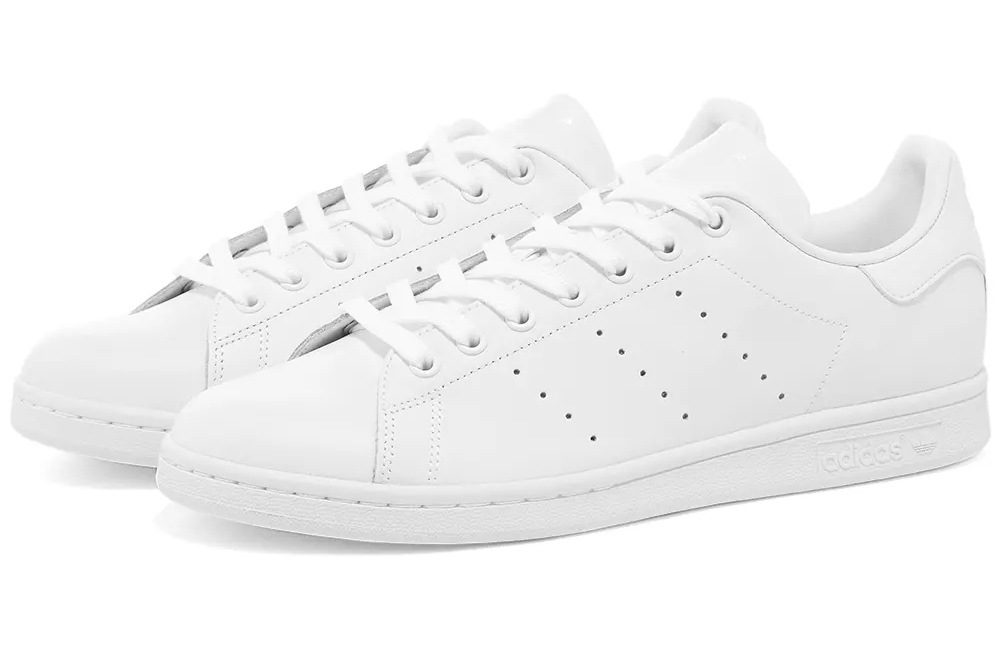 The loosening up of menswear across the board has resulted in more than just comfortable legwear. It’s also turned sneakers from sportswear into everyday essentials, with one particular breed becoming this generation’s answer to the Derby shoe.

High-end, minimalist sneakers of the sort championed by Common Projects, Axel Arigato and Maison Margiela have become a huge part of contemporary smart casual dressing. Their simple styling and subtlety makes them endlessly versatile and useful for bringing ordinarily dressy pieces back down to earth. 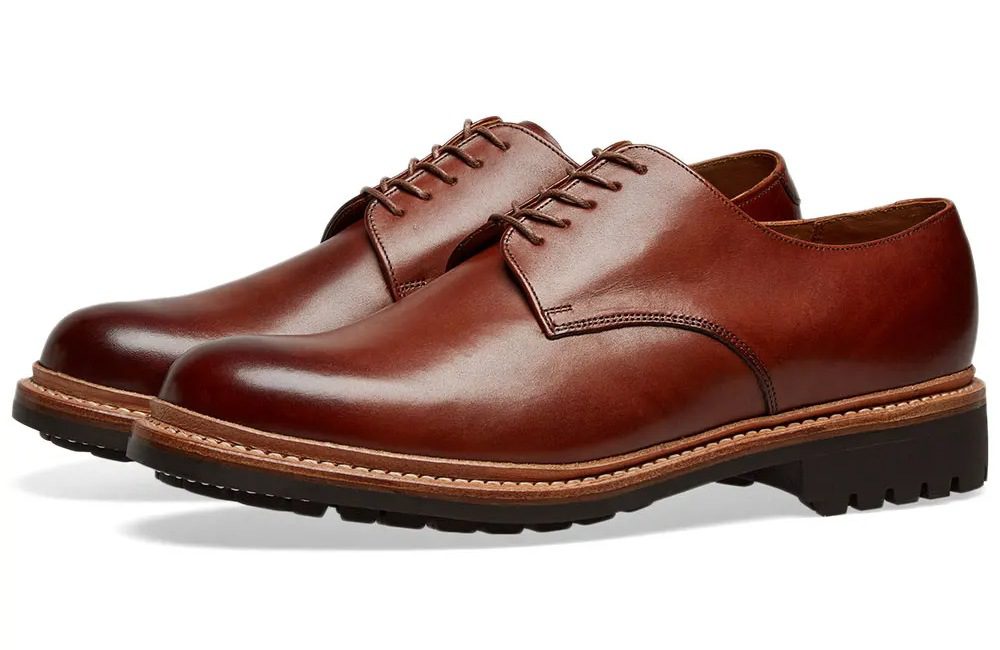 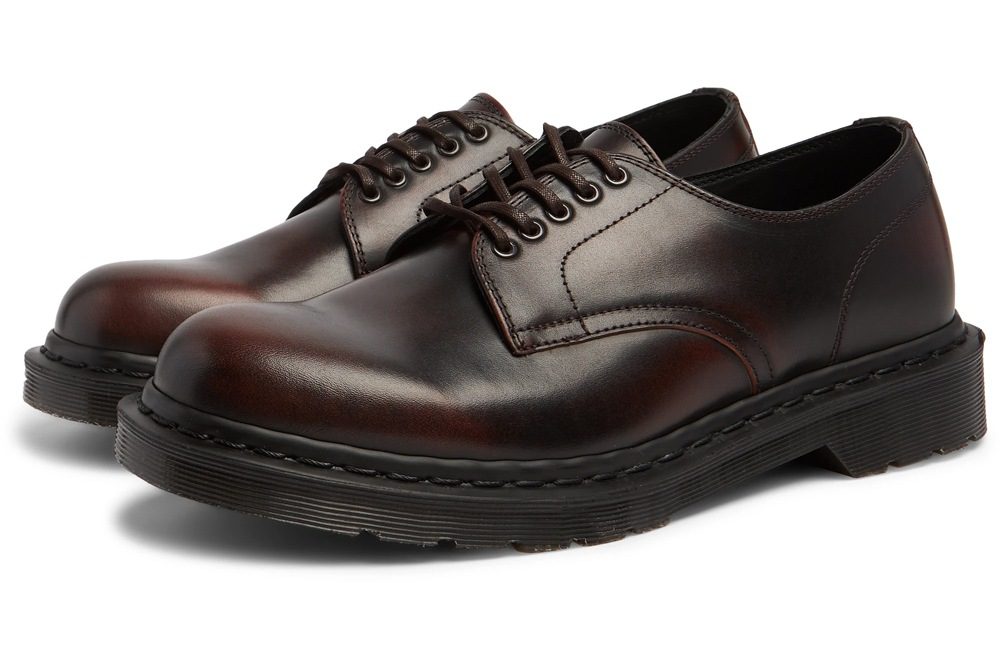 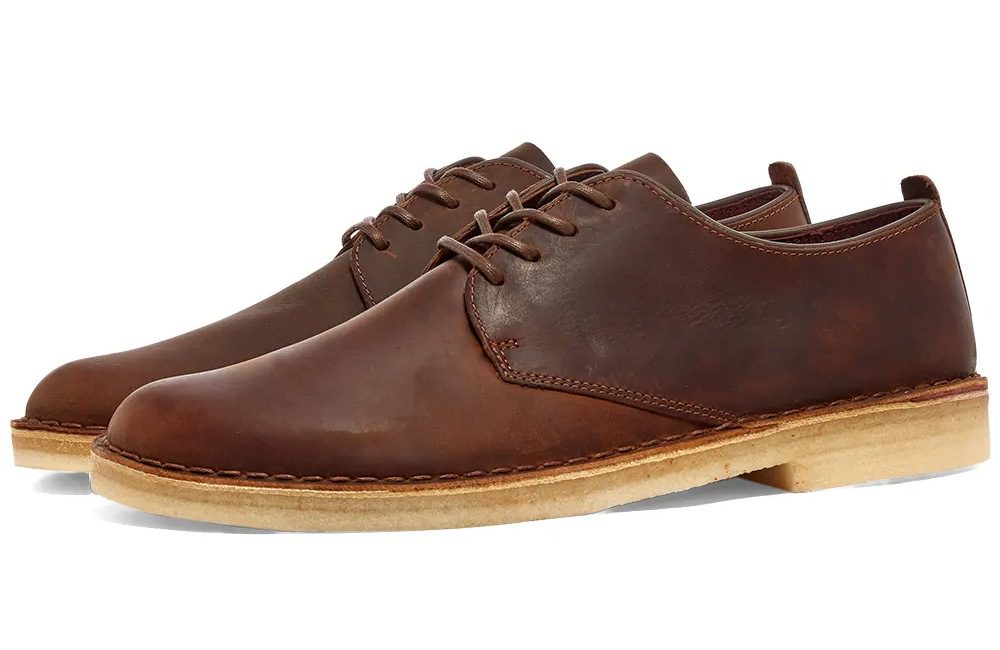 Be they suede or leather, Derby shoes have long bridged the gap between smart and casual when it comes to footwear. Dressy enough to mingle with tailored trousers, yet not averse to roughing it with some well-fitting dark denim.

No collection of smart casual clothing could be considered complete without a pair of these time-honoured all-rounders resting on the shoe rack. Simple, effective, versatile and absolutely timeless. 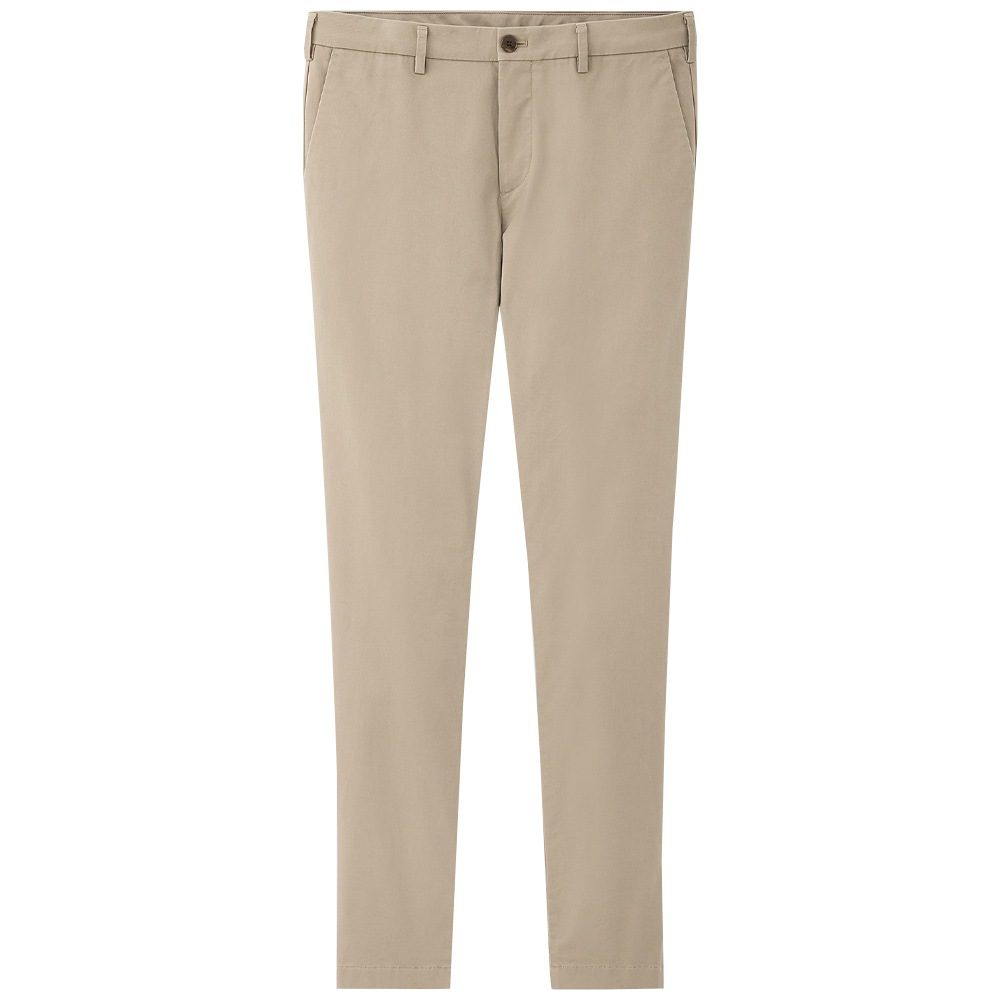 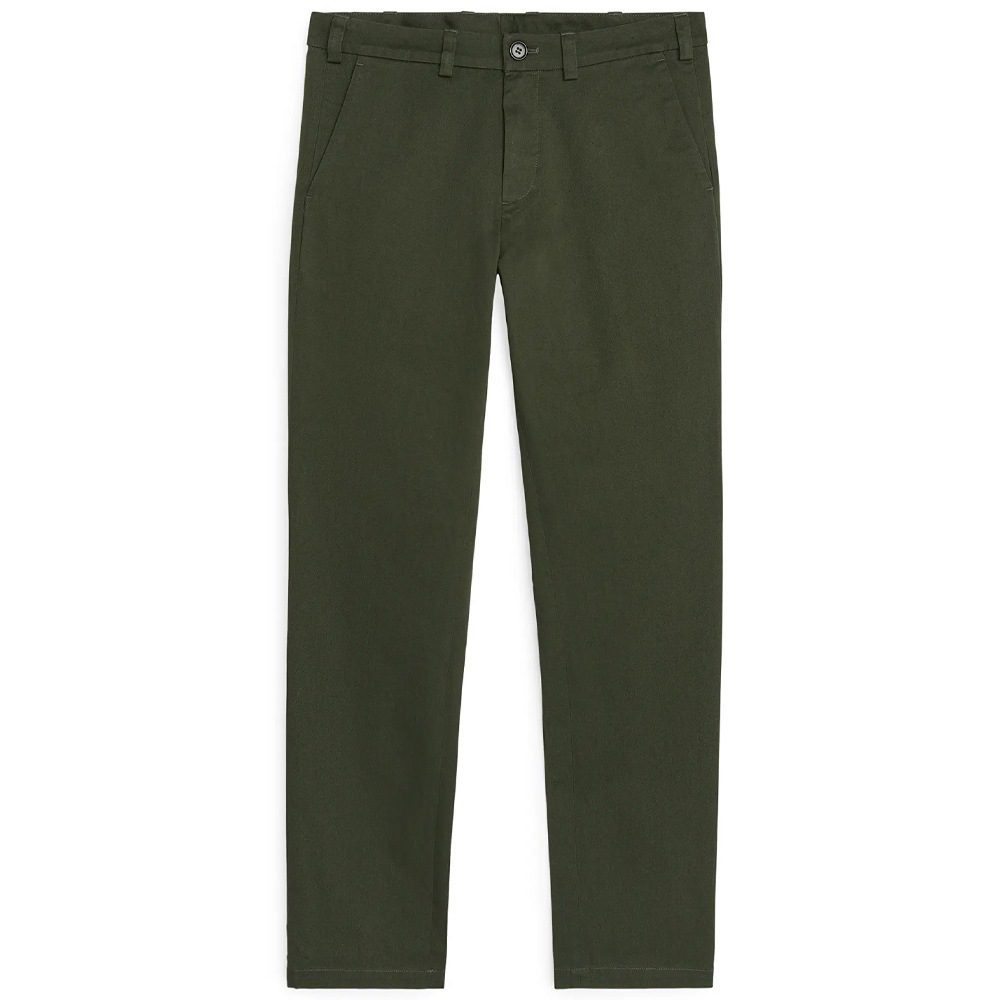 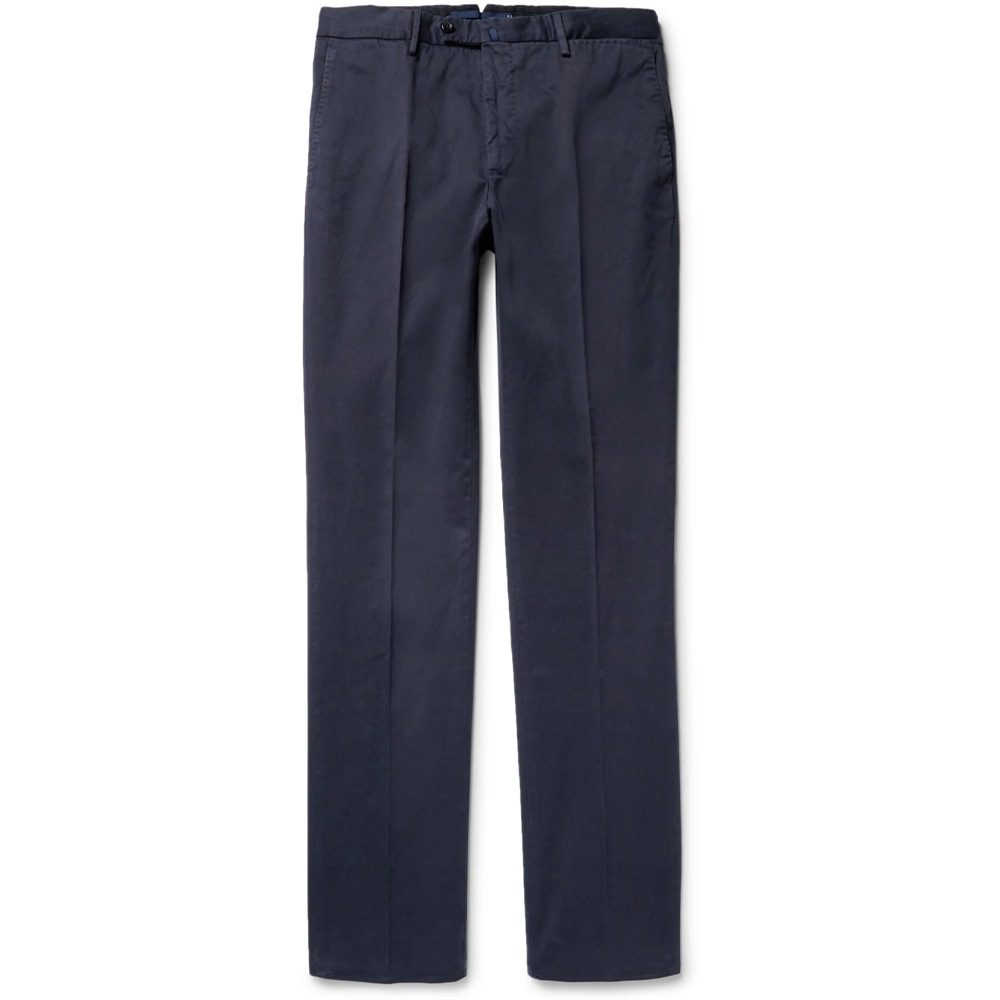 Denim legwear can come across as somewhat uncouth. Even though it’s not entirely off limits (a slim-fitting jean in a dark colour is the obvious example), if there’s any doubt in your mind, jeans are best avoided in favour of something a little smarter. That’s where a pair of slim-fit chinos comes in.

Smarter than denim, yet more relaxed than dress pants, a pair of fitted chinos occupies the middle ground and can easily be dressed up or down. Khaki is the most common colour, but outside of that, navy and white are both good options. 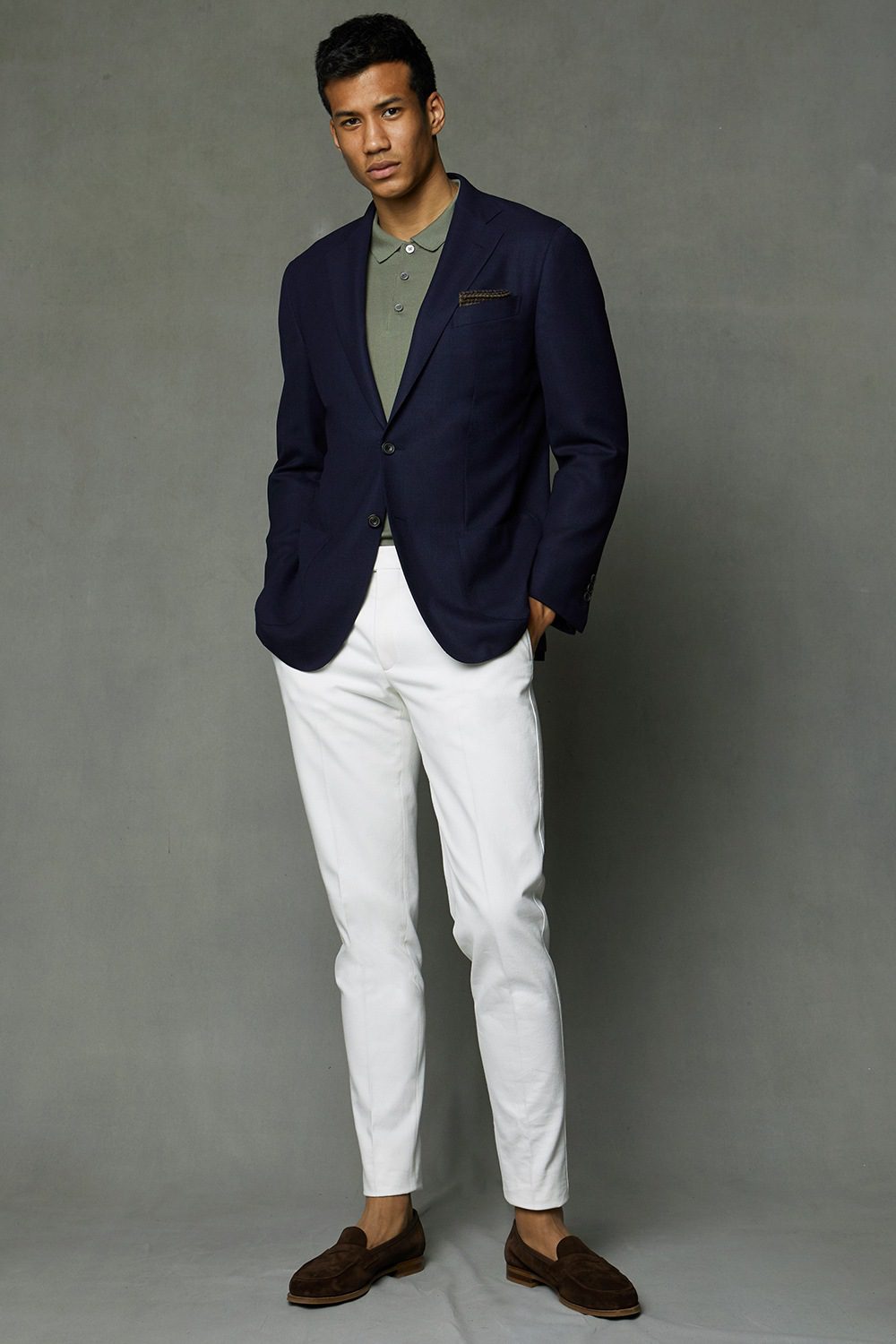 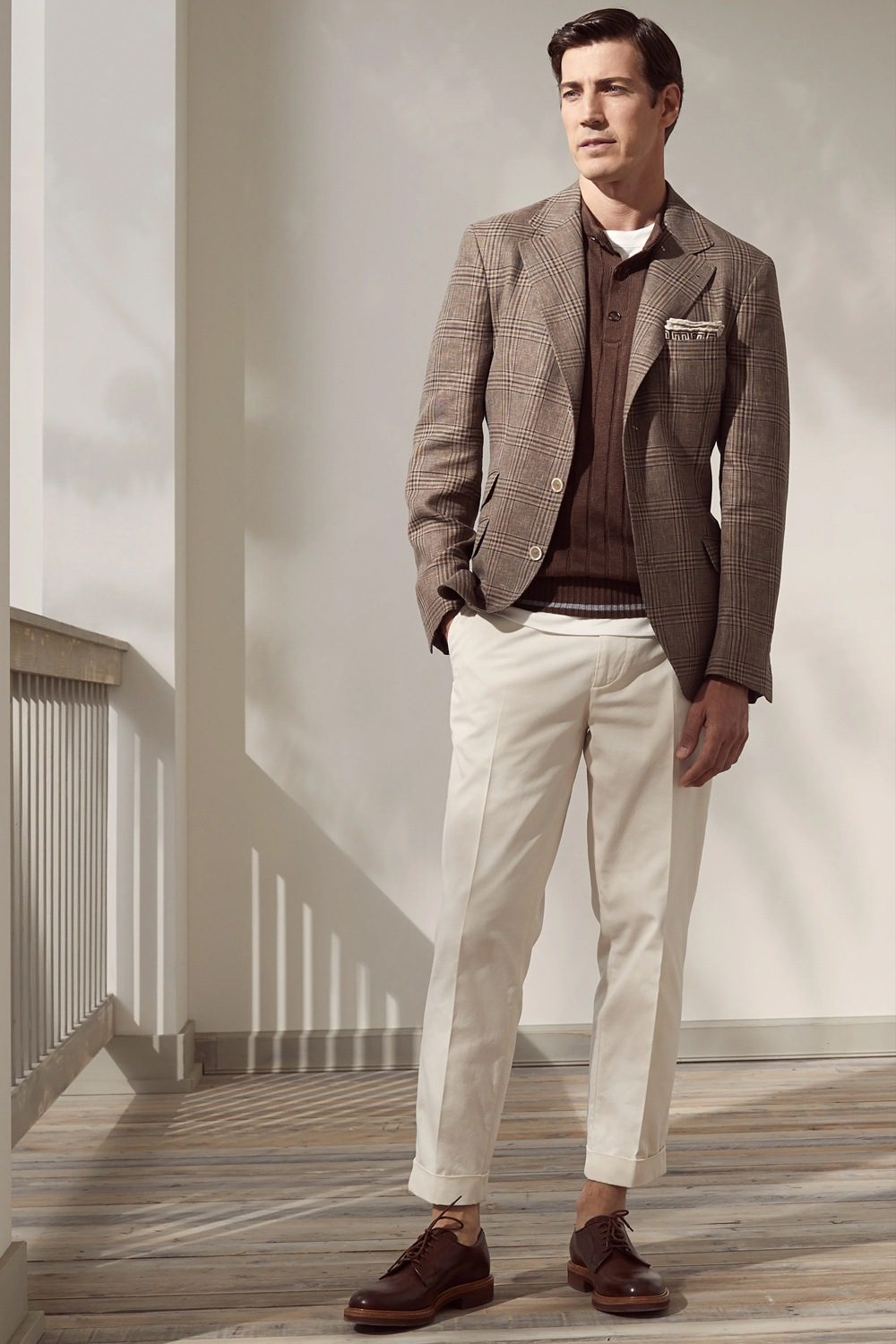 As the old saying goes, it’s better to be overdressed than underdressed. True as that adage may be, it’s still something of a gaffe to arrive at a smart casual event dressed in top-to-toe tailoring.

One way around this is to experiment with suit separates. For the uninitiated, this is the practise of mixing and matching tailored jackets and pants in different colours or shades. Resulting outfits are still smart, but without being overly formal.

This idea can be built upon by introducing texture into the mix to dress things down further. Just stick to either tonal combinations or colours that contrast without clashing. Navy & grey and olive & cream are both safe bets if you’re stuck for inspiration. 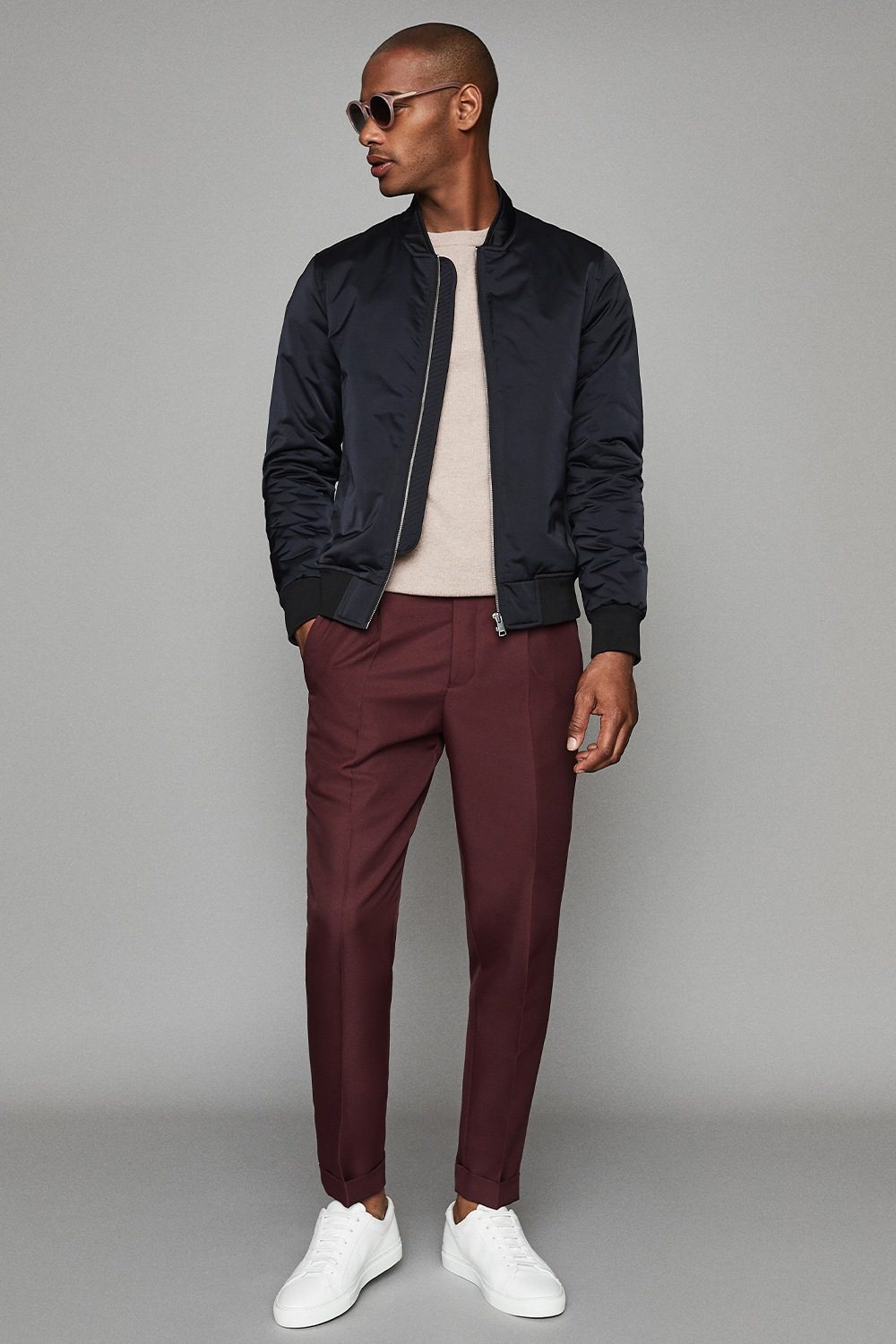 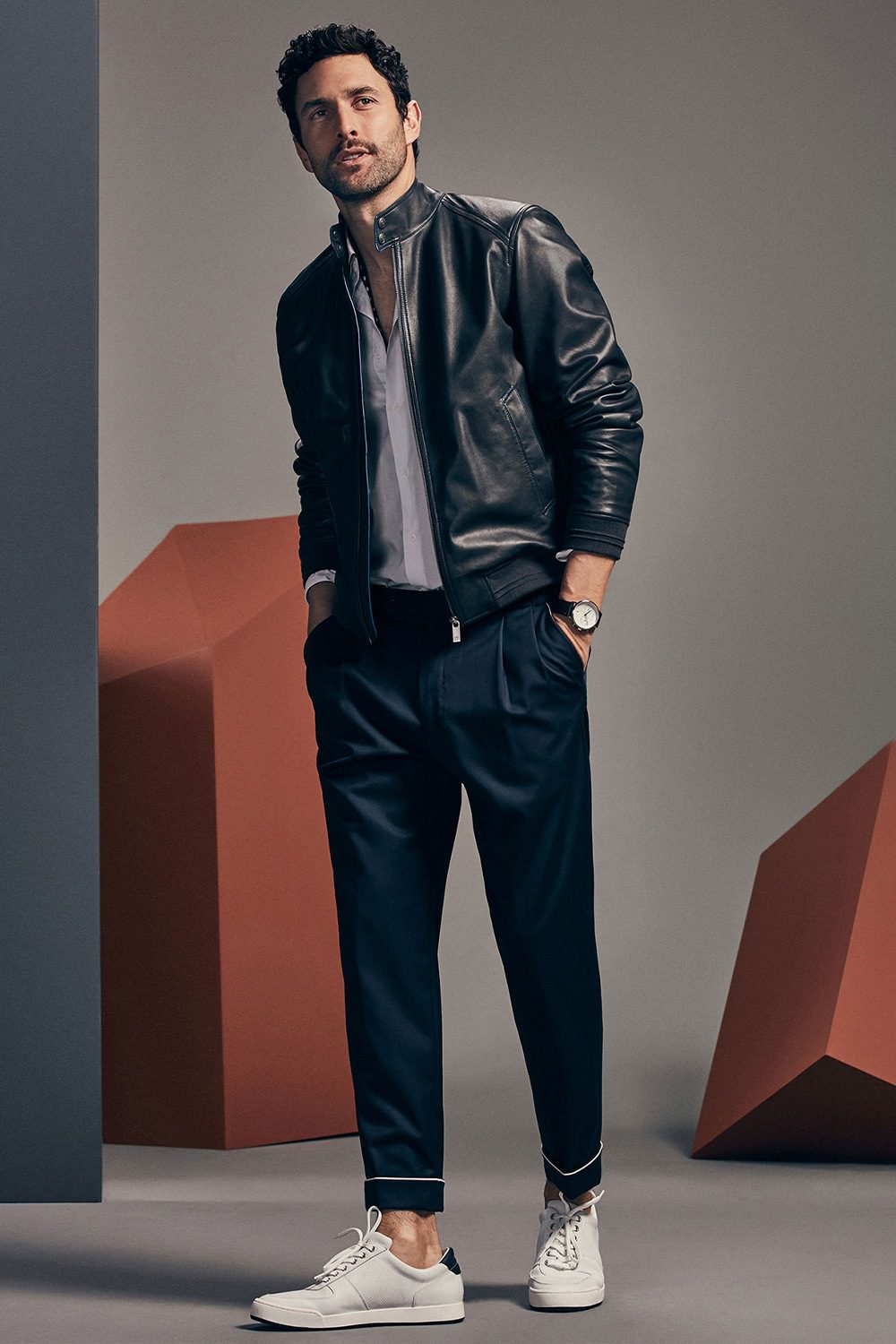 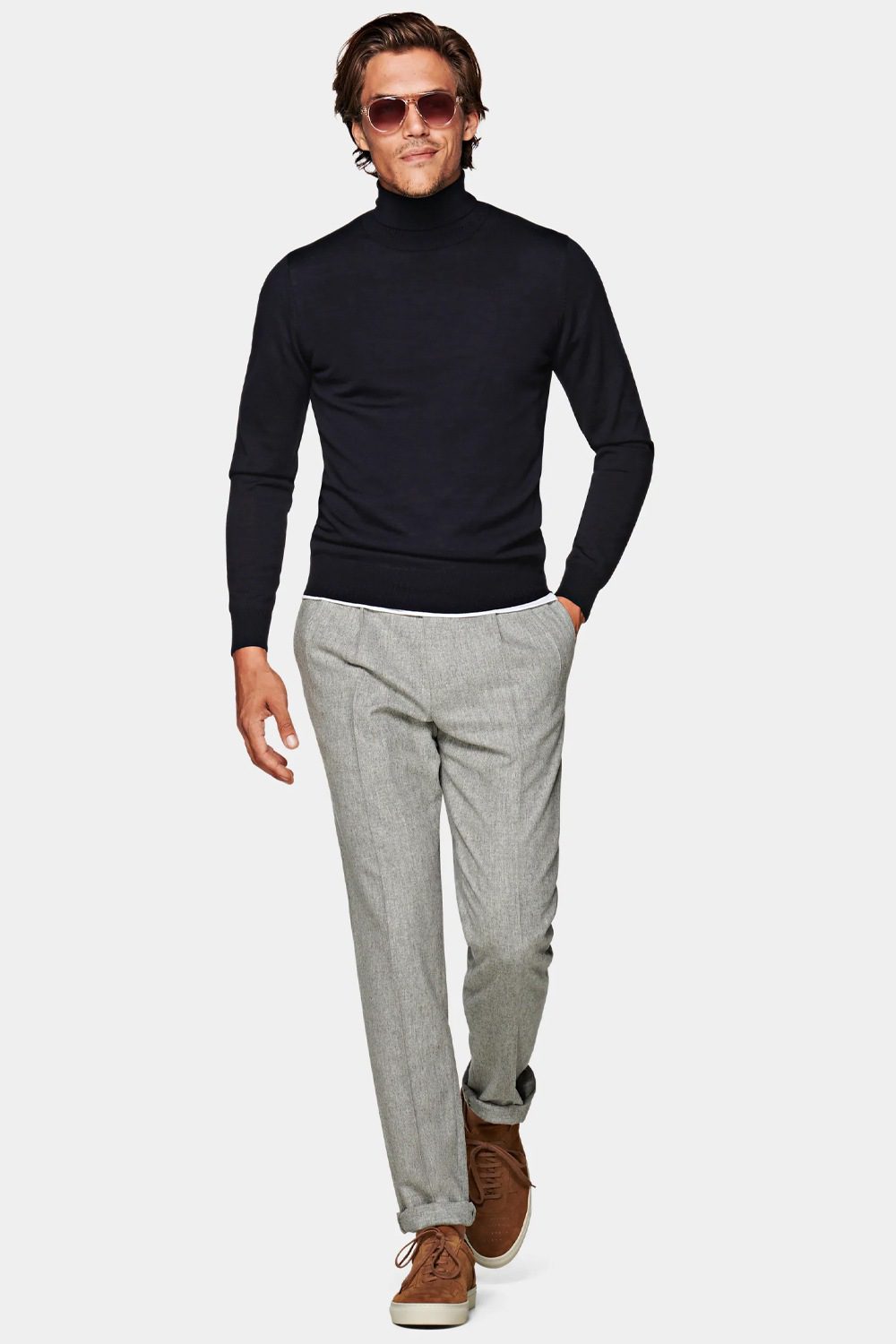 The evolution of smart casual as a dress code over the years has been marked by a shift away from tailoring and towards premium iterations of casual pieces. This contemporary slant on a long-established way of dressing is characterised by garments like the suede bomber, tailored sweatpants and high-end minimalist sneakers.

Pulling it off is all about restraint and the quality of the garments. Sometimes a smart casual outfit need be nothing more than a fitted roll-neck sweater, a pair of wool pants and some white leather sneakers.

Yes, it’s more towards the casual than the smart end of the spectrum, but part of being well turned out is knowing when and how to adapt to the ever-changing menswear landscape. 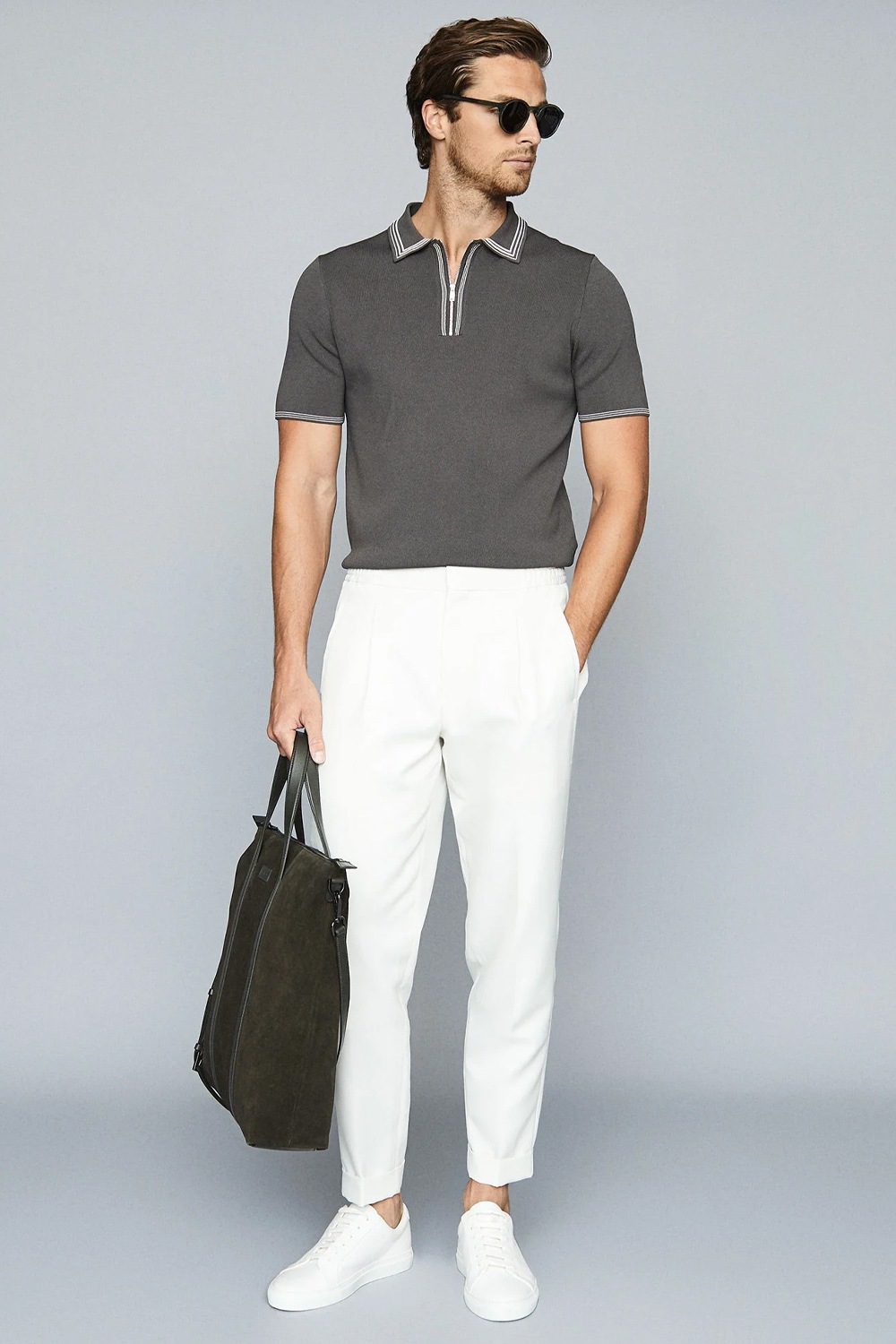 When putting a smart casual outfit together, it’s good practise to keep the arms covered. However, there are few sights less presentable than a man in a woollen blazer, crew-neck knit and thick Oxford shirt sweating profusely in the blazing heat of high summer. This considered, it pays to exercise your discretion when deciding which rules to follow.

When the heat won’t allow for layers, a polo shirt is your friend. Featuring lightweight pique cotton fabric, short sleeves and a collared neck, this summer favourite is smart casual through and through.

Just make sure it’s nice and fitted and dressed up with smart pieces like tailored pants, a leather belt and some matching leather loafers. 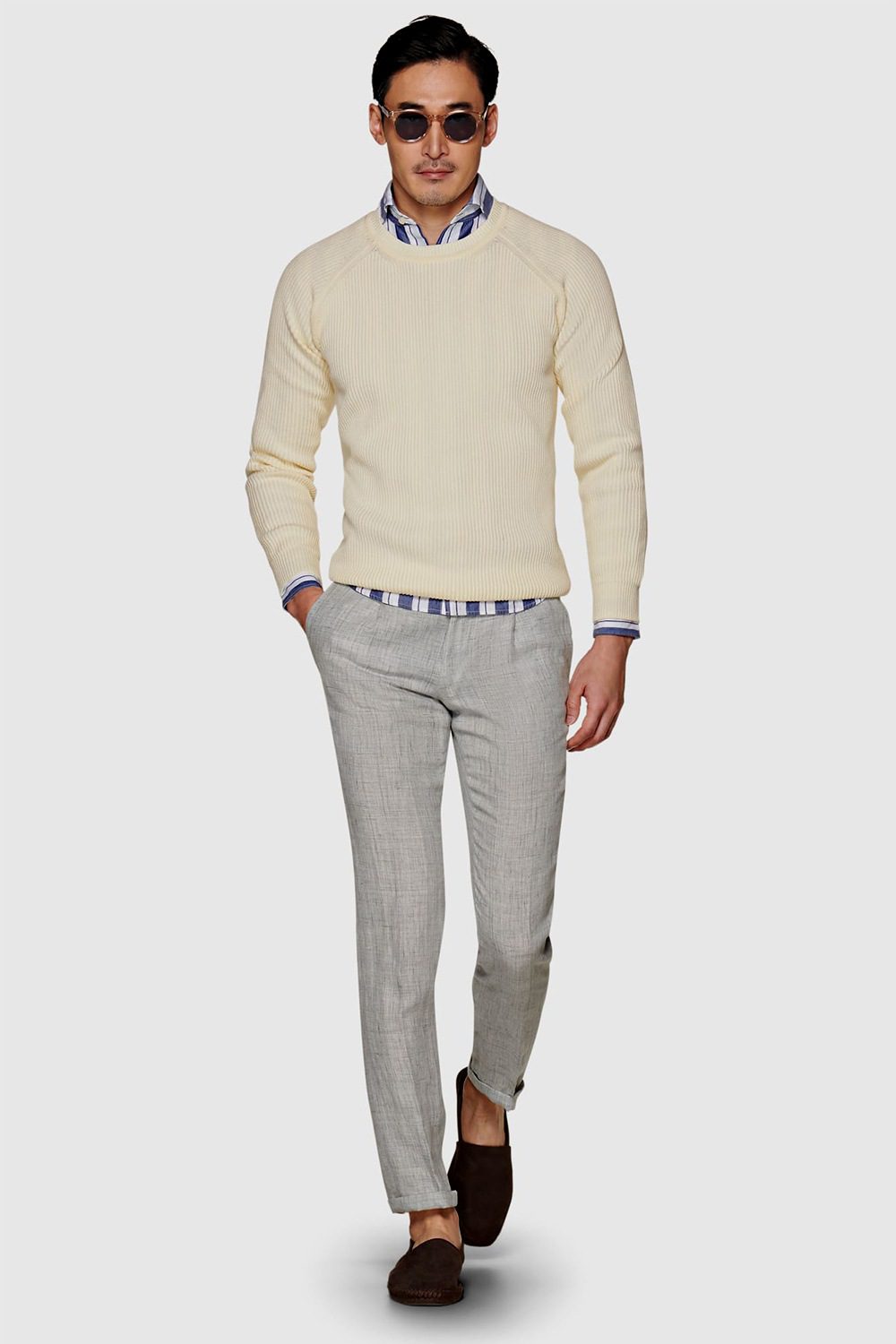 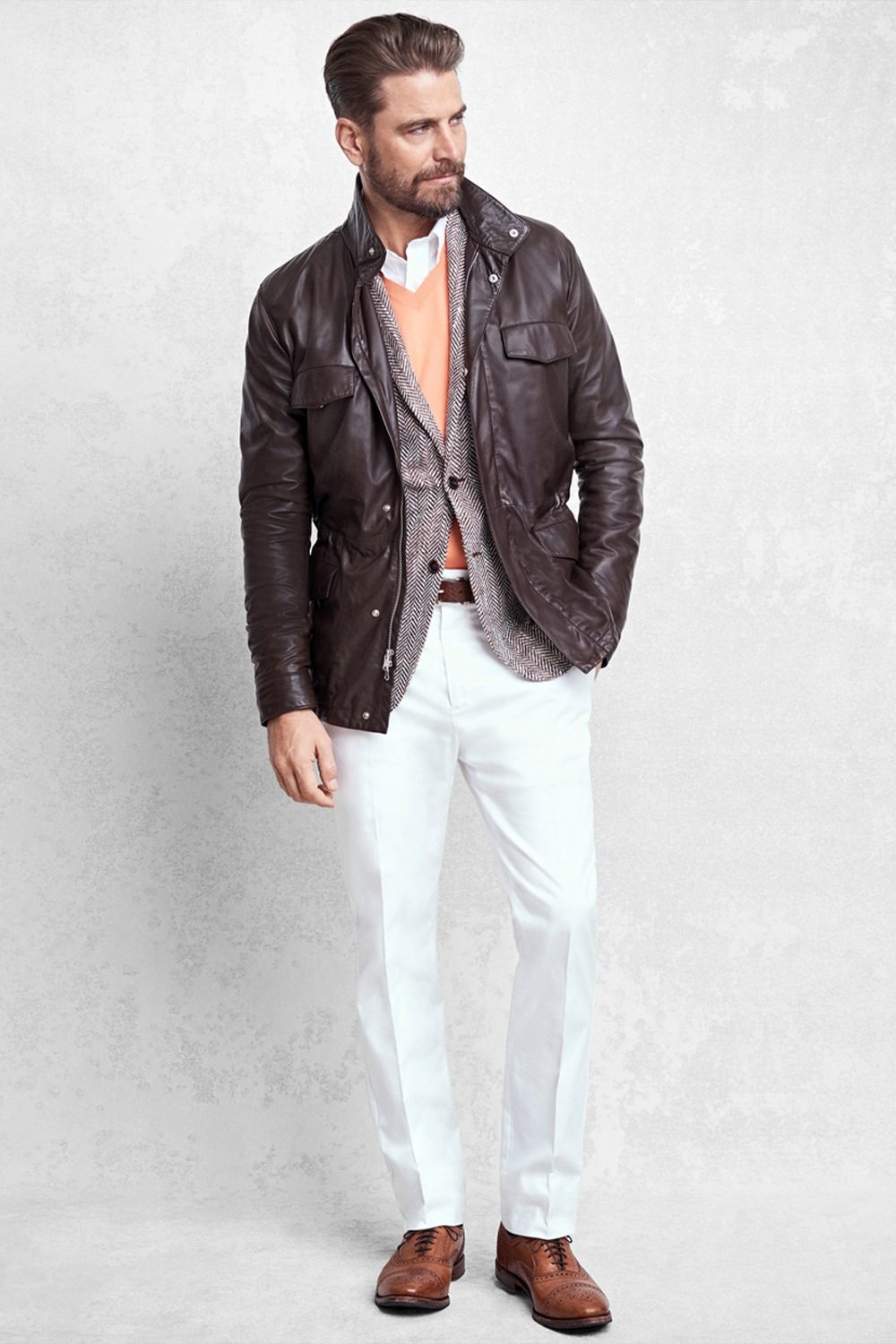 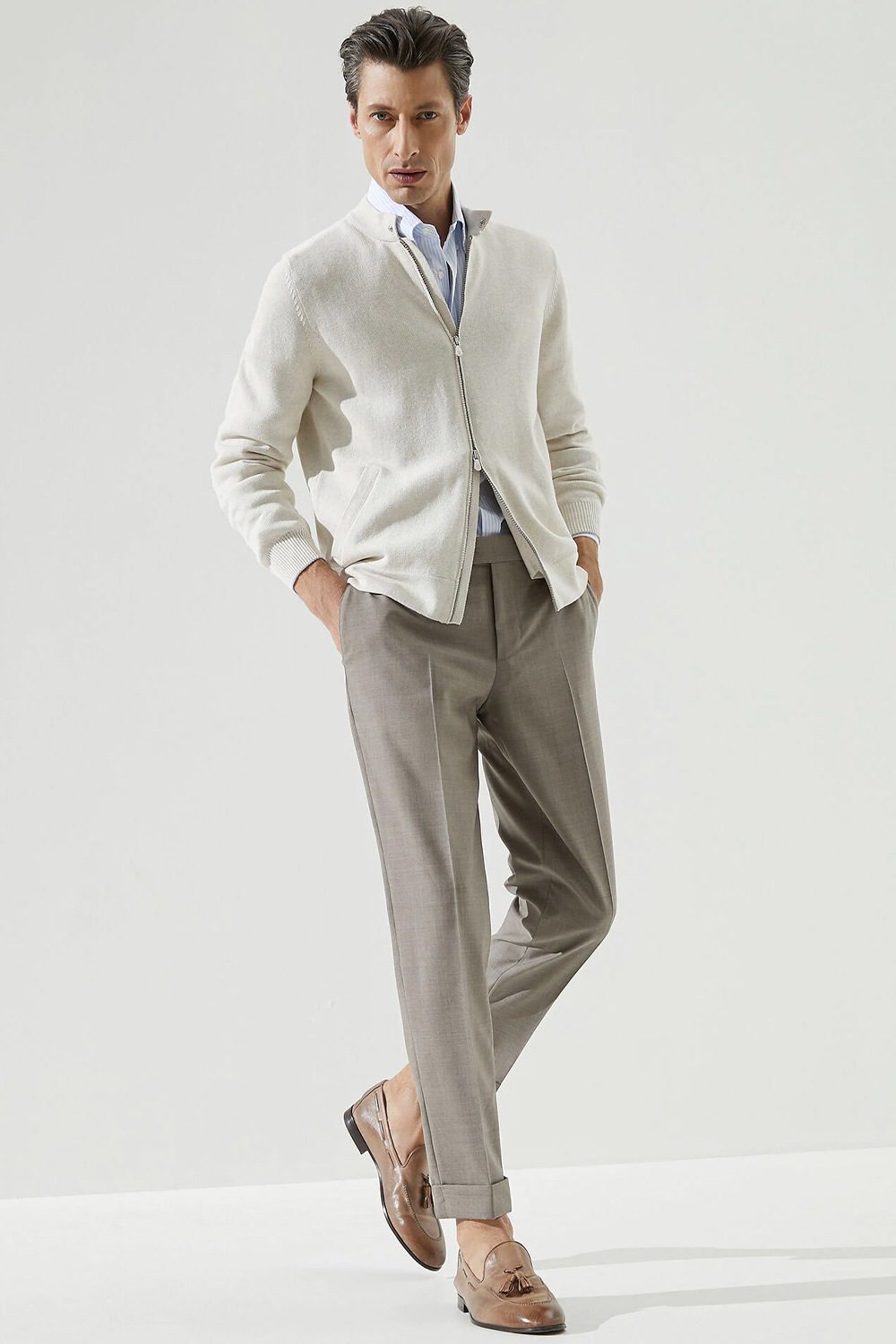 The preppy style of dress that first sprang up on the college campuses of Northeast America in the 1950s could be described as a smart casual subgenre. Collared shirts, layered knitwear, textured tailoring and chinos all feature heavily, making it an excellent point of reference for smart casual outfits.

Layering is one of the pillars of Ivy League style. An Oxford shirt worn with a crew-neck sweatshirt slotted beneath an unstructured blazer is a good place to start.

Legwear-wise, avoid denim and focus all of your attention on chinos instead. They could be classic in khaki or give a nod to our own red brick universities here in the UK with a subtle maroon – a less obnoxious take on the scarlet pants long sported by Oxford and Cambridge students. Failing that, play it safe with navy blue.

Still struggling? Here are five foolproof rules for those seeking to be better safe than sorry:

Whereas smart casual might once have perplexed, now it’s as good a definition as any as to how most clothes-conscious men dress outside of work (and, increasingly, in it with the rise of business casual dress codes) much of the time. Which is why it’s probably a term that’s set to face extinction, most likely after a spell of righteous ridicule as being as terribly of its time. The first recorded use of “smart casual”, a phrase more closely associated with the 1980s, actually dates to 1924, in a reference to women’s dress in Iowa’s ‘Davenport Democrat and Leader’. One could well place a bet that one century on, come 2030, “smart casual” will sound just as quaint as the name of that newspaper.