by admin May 03, 2020
It is day 54 of our self quarantine. I really had no idea it would last this long. But I think it needs to last as long as it needs to last, until we have some answers or some proof that things are declining and we will be safe again.  Wisconsin numbers are slightly dropping, even with the newest increase in Green Bay at the meat packing plants.  Let us hope they continue to decline.

Of course, being quarantined this long, that means it's been more than 54 days since my shaggy headed husband had been to his hairdresser, Kelly.

Although I do like it when Steve's hair gets a little longer and a little softer and a little more 1970s-ish style hairdo... I think it had reached a point where he really needed to get it cut. It was getting in his way when he worked on things and blowing around into his eyes... Or so he said. 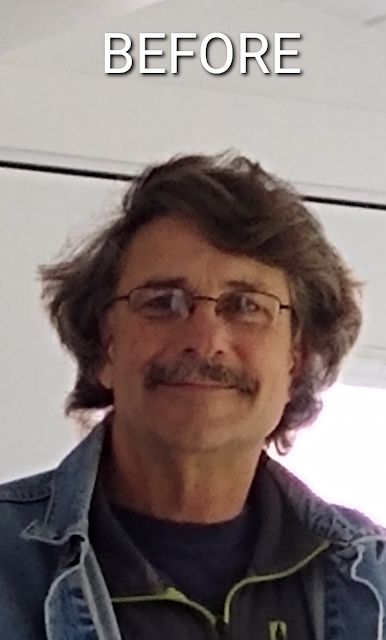 This morning he had had enough. He sat down on the little footstool in front of my chair, and let me get out my scissors and my comb and a spritzer bottle to try and get it under control a bit so I could trim it.

I figured if I just took each little section and cut off an inch all the way around the entire head, the hairstyle should remain the same? That is, if his hair grew one inch everywhere and every direction? It seems good in theory anyhow. 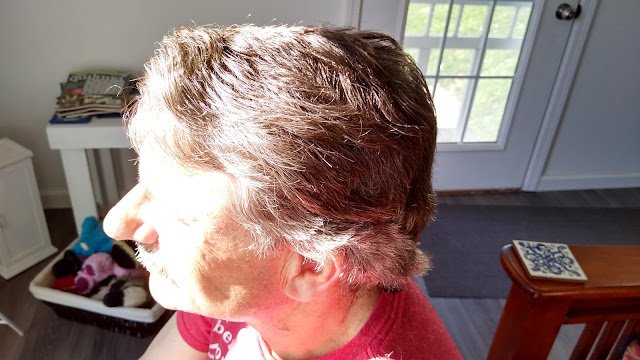 He said that he noticed when I groom the dogs, they come out looking pretty good. So I should probably do all right when I do his hair???  He trusts me. 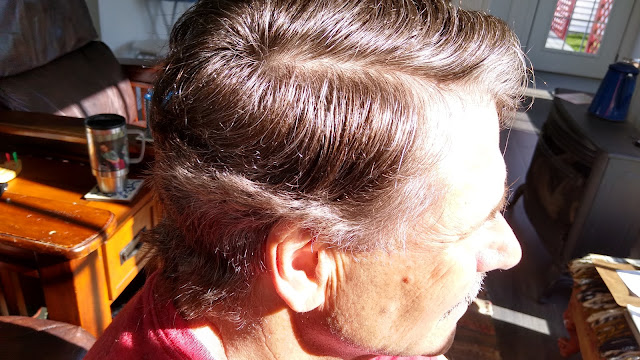 He took out a little mustache trimmer and let me buzz off the curly hairs on the back of the nape of his neck. He giggled. I asked if he did that with his hairdresser Kelly?  "No", he said, "just with you!"

And here is my handsome man. 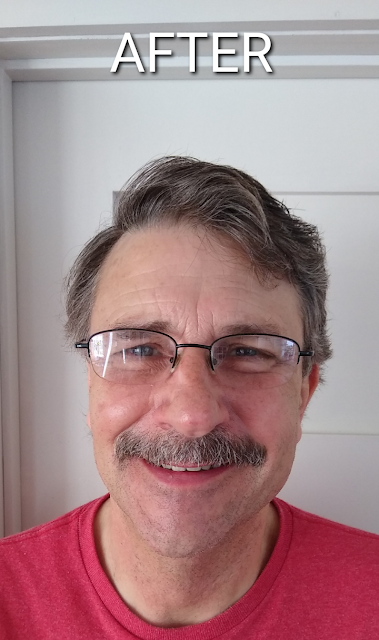 We've been working on
a couple more projects
around our national folk farmhouse.
If you recall, a few months ago Steve was working up in our attic. He finished the electrical wiring and spread new insulation and added vents in the soffits. It's much easier to get in to and out of our attic through this front window on the gable by climbing a ladder up to the window by the front porch. 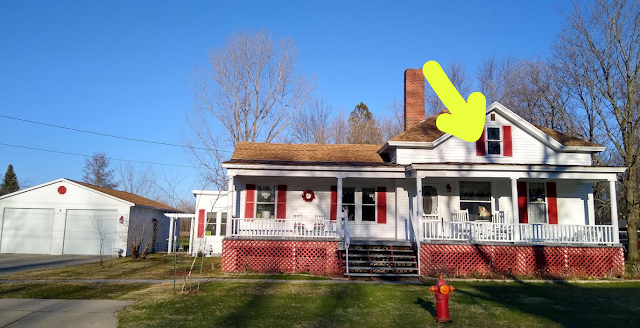 He got an idea.  Instead of opening the window in the traditional way like a normal casement window, sliding it up, then he has to get down on his hands and knees to shimmy through just the lower open portion. He decided to create a different type of full window that could open up like a door and he could access the entire space to step right inside.

He decided to look for a window that would fit that space. We did not need to buy an expensive insulated window because the attic is not heated.  It is a strange size and would have to be custom ordered. We do have in the future plans to put new windows all around on the main floor of the house. I would like to get them with the little individual panes or the grids between the layers of thermalpane glass. So that is what he looked for as a style of window for this upper portion of the gable.

Of course, he found one that was the exact size he needed while browsing on his wonderful Facebook Marketplace. We picked it up by social distancing for a mere $25.

He touched up a few spots with new glazing, and I was able to give it two good coats of a heavy exterior paint.  I cleaned it up with a razor blade scraper and it was ready to hang. 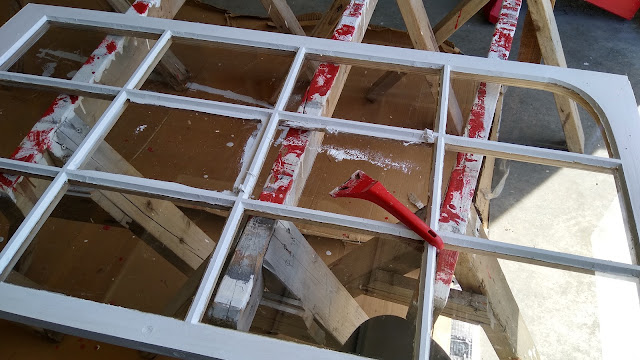 Today he popped his ladder up against the front porch roof, and went up there to replace the window.

It can now hinge open like a little door and latch back securely into place. I think this makes the best sense, considering the alternative of having to crawl up through a small scuttlehole inside of the house to get to the attic. It's not often we should ever have to go up there again, now that the new insulation is spread and the wiring is done... But having easy access like this makes it a lot better. 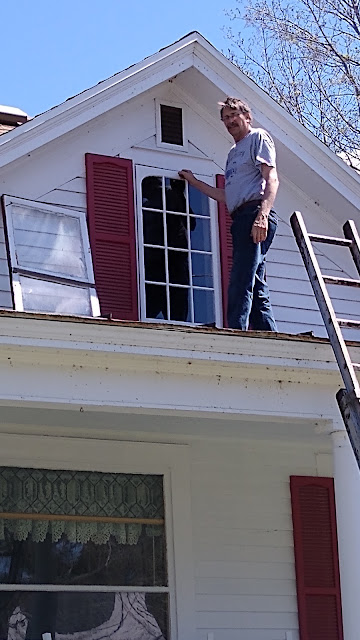 I think that looks so cute up there! 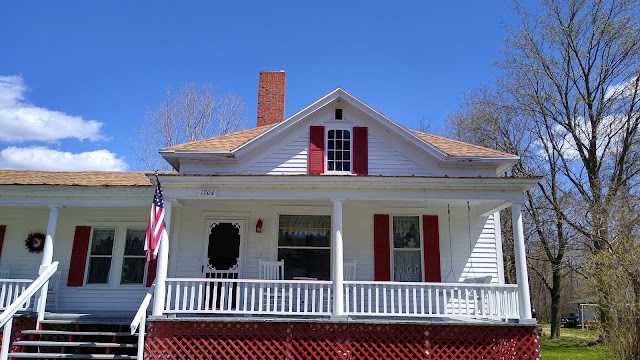 We still have to do a few little tweaks on the gable, including some new siding and touch up paint on the eaves. Then I don't think we'll need to go up there again for a long time. 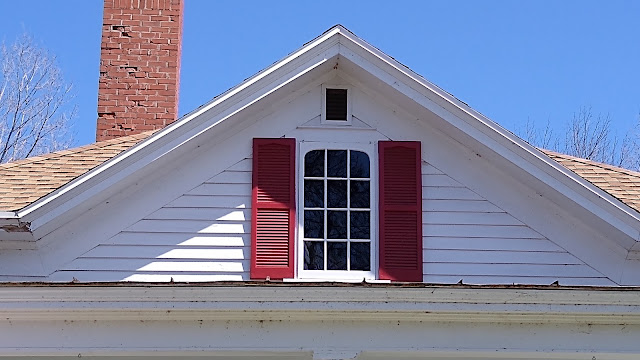 Speaking of paint, I finished painting the fourth side of red lattice of these two panels we had on hand.  These two panels are being recycled from a garden structure that was here when we first bought the home. They were just plain grayed-out wood that was put up as an array backdrop of a flower garden in back. We decided to take it down, as we enjoy the natural trees, shrubs and woods look out the back rather than this treated wood lattice work. 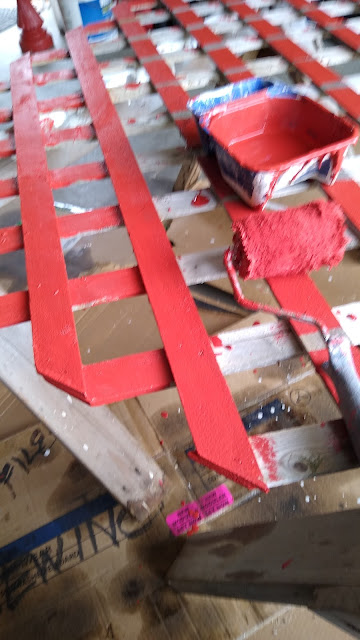 It took quite a while to paint the lattice on all four sides and catch all the edges and cover everything in the red paint. We set them up on saw horses out in the garage. It ended up being a "sit-down job" for a number of hours, with my tunes blasting on the radio as I worked my way around each panel on both sides. I used a small roller and then a bristle paint brush to get in all of the tiny spaces.

We erected two outer frames with the same dimensions as the frames we put on the two front sides of the pergola.  We made sure everything was level and plumb and square for both of these back panels that face out to the backyard. 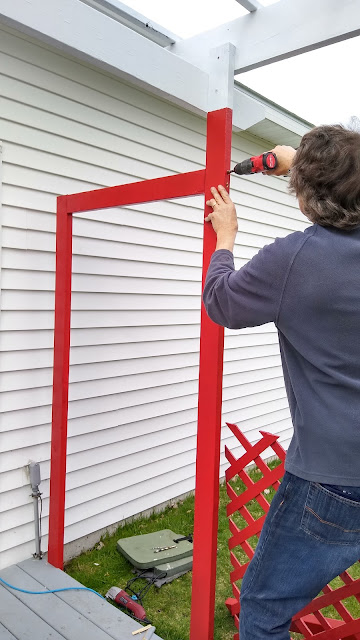 We screwed the lattice into place using coated screws that won't rust. Once they were into place I dabbed paint over each screw head so they would remain invisible. 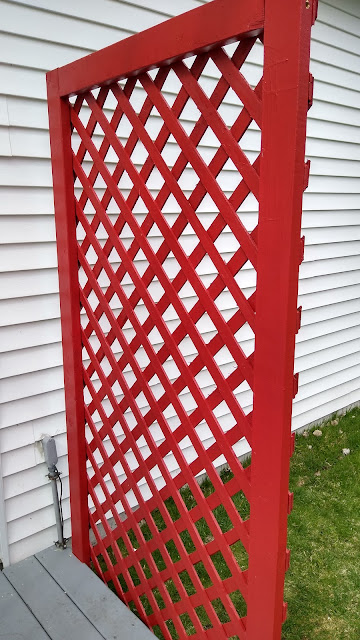 Soon both sides were done that face out to the backyard. I think on this back side I'm going to plant the ivy plants in two white cement pots that I got from my neighbor Sheryl. 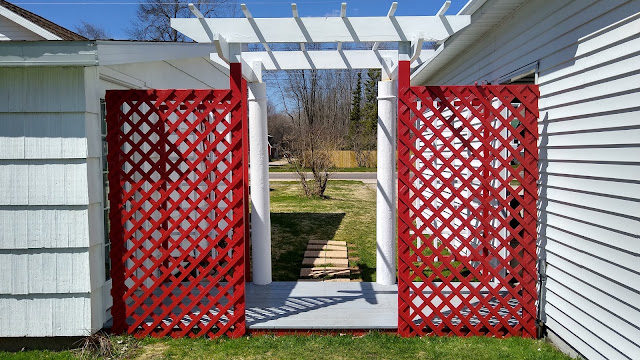 On the front side, I may try to plant some red and white clematis plants, and see if they take off. They're rather tricky to get started. If I can have success with those, year after year growing up and over the top, I won't need the ivy from behind.

(see Steve out there in the mud puddle?
more on that later) 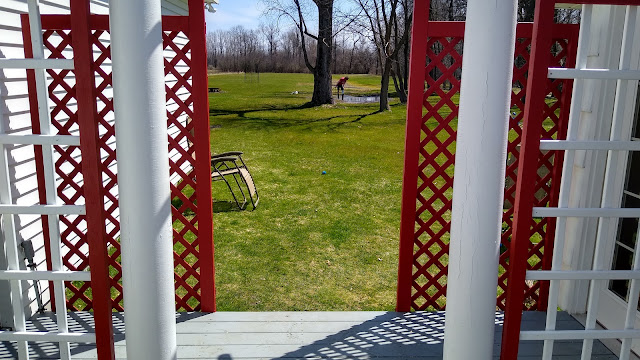 This is such an inviting way to get to the she shed to the right, straight ahead through to the backyard, or into the garage to the left.

I really like how the red lattice behind helps to set off the white grids of the trellis that faces the front. I know we could have just put four pieces of lattice on both sides, but I wanted something that would be a little different and eye-catching. 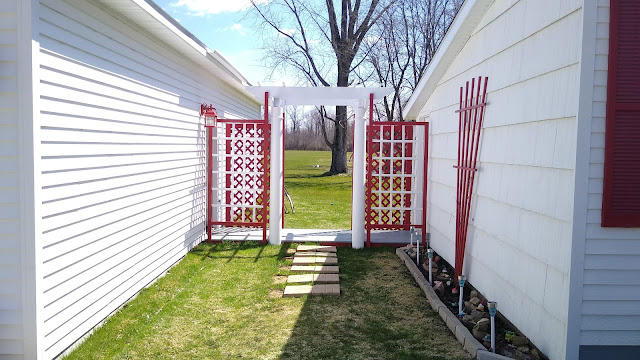 Now the pergola was almost complete. We had discussed about putting some clear plastic plexiglass, polycarbonate, or fiberglass on the top to keep some of the rain off as well as snow in the winter. Just to make it a little more pleasant to dash between the house and the garage...

Again, Steve with his handy dandy Facebook Marketplace listings, located a guy selling new sheets of exactly what we wanted, at a fraction of what it would cost at the home improvement store!

Tada! With social distancing in mind, we were able to pull into the guy's driveway, load up all four sheets, and leave the money in an envelope on his horseshoe pit setup in his yard.  No contact needed.

Again, our neighbors Sheryl and Ed came through with the proper type of screws to mount these. Ed had mounted some of this at his own home and he used the screws with a little rubber washer on the end by the head. We only needed 14 screws, and it seemed a shame to have to go buy a whole box full of 100 to get what we needed.  Sheryl brought us some over.  We love our neighbors! 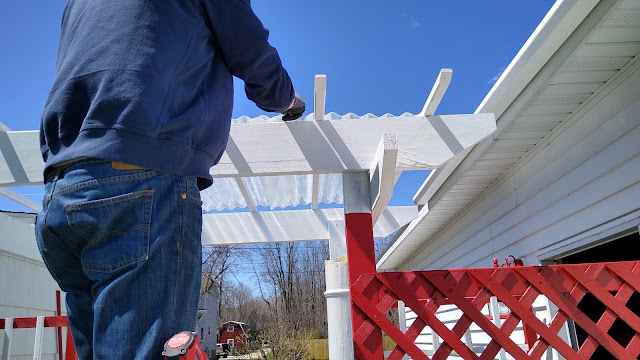 The panels easily went up and were the perfect size that we needed to create this unobtrusive cover over the pergola. It still lets the light through and doesn't make it dark, but somewhat protects the walkway below for rain or snow. 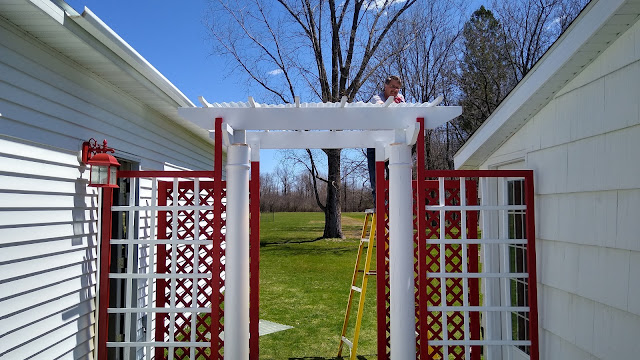 Ahhhhh look at that! 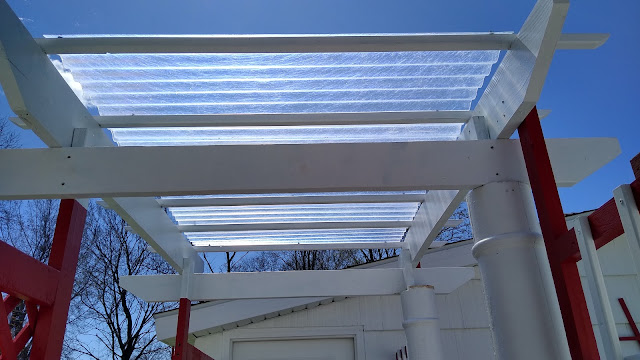 Now...
The pergola is finished! 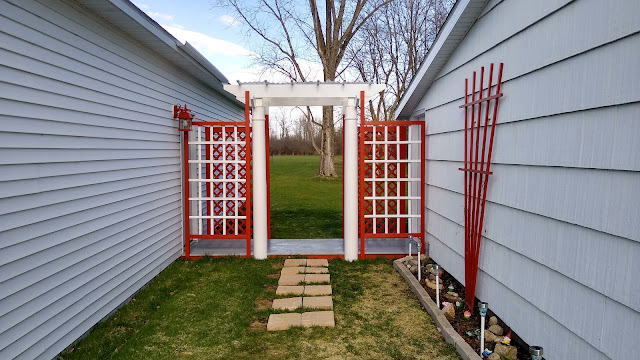 Thanks to this creative guy
who helped make my dreams come true. I think the next thing on our list of ideas for this area of our property is to get some better paving stones. The spaced-out tan ones in the pic above were some that we got free a while back. But they are a tripping hazard and we really need to get something better.

Maybe some that match the pretty grey ones that we have in the front yard leading to the front porch. Those are rather pricey at $5.49 each, and we would need about 40 of them! Ouch!

Perhaps it is time for Steve to keep an eye out on his Facebook Marketplace, and maybe he will find some?

But first, he has more pressing projects to work on.  He is having an absolute blast playing with his mud puddles each time it rains.  He gears up for the task: 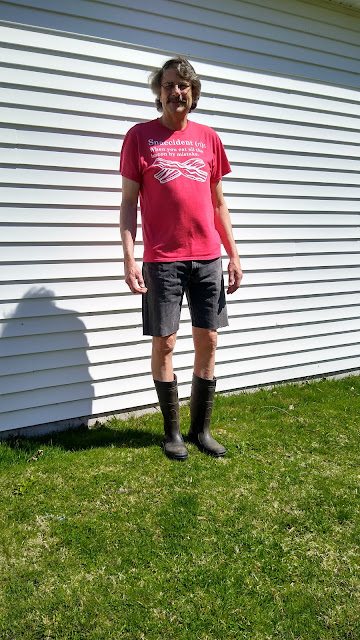 Then he heads out with his little pump and hoses, and works on emptying the big puddles in the backyard, routing it over to the drain pipe he unclogged last week. From there it goes out to the curb and gutter, and drains off into the marsh at the end of town. He goes back and forth, checking his hoses, and watching the water move through the pipe and out into the gutter.  He is "gleeful" to watch it work.
What a happy guy!