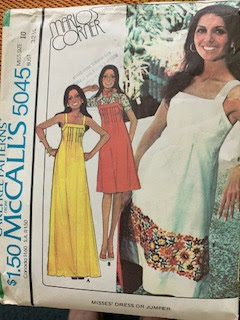 Mystery and romance author Barbara Barrett writes the Mah Jongg Mysteries, a cozy mystery series set in central Florida, and contemporary romances, the most recent being the UnderWright Productions Series. Learn more about her and her books at her website.
Over the years, I’ve worked out a writing schedule that accommodated my enjoyment of lunches with friends, lifelong learning classes and two Mah Jongg games a week. But my writing has always taken precedence. The sewing machine I purchased two years ago, with the exception of a couple projects, has remained unused. Other projects I’ve started have been stored in bags in my closet, rarely seeing the light of day. My mind was on my books and getting the word out about them.
Then in March, even those limited external activities came to an abrupt halt when COVID-19 hit.
Because I have spent the last several years focused on my writing, adjustment to the “new normal” of the coronavirus was easier for me than for some. I’ve been able to remain fairly productive, finishing the sixth book in my Mah Jongg Mystery series, Jokers Wild, due out in early July. I started the next book, The Charleston Challenge, scheduled for release next fall. I also wrote and published The Mistresses of Mah Jongg, an introduction to the four protagonists in the series. You can download it for free here. 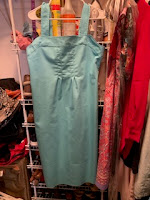 However, with little outside stimulation, when either the words wouldn’t flow or I just needed a break, I’ve been revisiting some of those craft projects that have gone wanting. If you’re old enough, you may remember the sitcom “That Girl” starring Marlo Thomas. At one time, she leant her name to a collection of dress patterns. In the mid-70s, I used one of those patterns to make a white sundress trimmed with a red and blue quilt border in honor of the Bicentennial. Forty-five years later, with that dress having been given away years ago, I decided to see if the pattern would produce a new sundress that looks as stylish today as the original. This time I used a bright aqua sport cloth. Took a little restructuring, but in the end, it turned out pretty well. Everything is finished. Except for the hem. Now, with warmer temps, it’s time to wear it. If only there was somewhere to go. 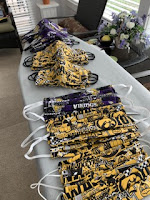 While I was working on my dress, others were sewing face masks. I couldn’t get excited about such a project, even though they were easy to make and so needed. I held off until my son requested some for his family, since they didn’t have a sewing machine. As part of recent downsizing efforts, my fabric collection was no longer the robust assortment it used to be, so I was lucky to find four pieces, plus an old torn sheet. But once I got started, my mind took on a factory line mentality.
In fact, once I finished the first batch of ten, I braved a trip to the fabric store to purchase licensed college and professional team cotton featuring the Iowa Hawkeyes and Minnesota Vikings. I produced another twenty-five masks. The main challenge was finding enough elastic. Everyone was sold out. I finally purchased ponytail bands. I still have a few masks to finish, but after those first two efforts, I can’t get excited about completing the job. 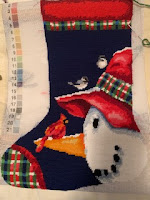 I was somewhat more successful with the needlepoint Christmas stocking I began three years ago for my youngest grandchild. I find needlepoint restful, unless I miss a stitch. There’s still a little more to finish, but I think this is the Christmas it will be hanging with the rest of the collection. 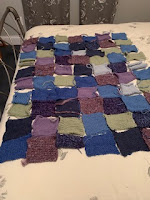 Since I only work on the stocking in the daytime when there’s enough natural light, I needed something else to occupy my restless hands later in the day. I pulled out an old knitting project that I worked on whenever my knitting group met. While the rest of them created sweaters and afghans, my speed was squares. These will eventually be stitched together to make a bed cover. I laid them out to photograph for you. Looks like I’m not done with this project yet, either.
Notice any trends here? I think it has something to do with what feels like the never-ending nature of the quarantine. Guess I just don’t feel rushed. Except to get the next book finished. 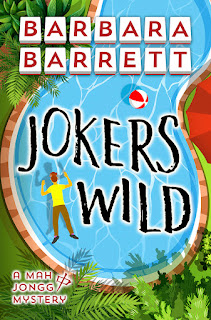 Jokers Wild
The Mah Jongg Mystery Series, Book 6
Marianne Putnam’s one-act play is about to come to life, if she can put up with the guidance of an egotistical New York director who seems to think his primary job is tormenting the cast and crew at the Serendipity Springs community center. Jason Newhall’s efforts might be working in more ways than one — while the play gets better, everyone hates him more and more, including a trickster playing jokes in the theater.
Just when Marianne’s baby is about to have its moment in the spotlight, the director fails to show up for curtain time. Marianne and his wife rush to his house to find him dead. Though no one really liked him, who hated him enough to kill him? Everyone in the cast and crew is considered a suspect, along with the director’s wife and Marianne.
Sheriff Formero plays a trick of his own when Marianne and her mah jongg friends want to investigate the case—he invites Syd, Micki and Kat to work with him and his deputies to interview a long list of potential suspects, but only under his conditions. But Marianne can’t resist getting involved too. She enlists the hapless husbands of her friends, and they set out to solve the crime on their own ... only to learn the hard way that independence can be dangerous.
Buy Link (Pre-order now)
Share Share on Facebook Tweet Tweet on Twitter Pin it Pin on Pinterest
Back to Feed