Can Boris Johnson Navigate His Way Down The Coronavirus Mountain? 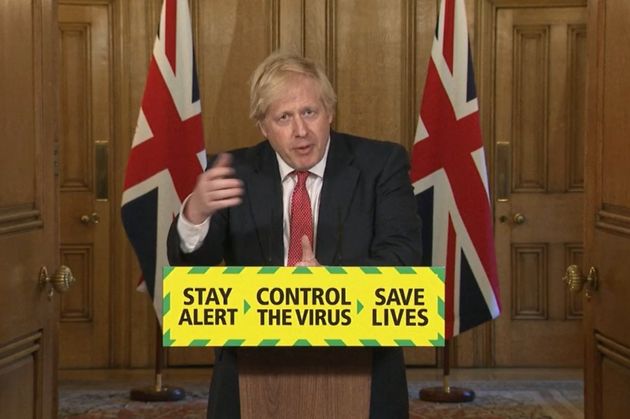 “Hope is not a plan”. That was one of the most candid assessments in the government’s new 51-page roadmap for easing the UK out of its seven-week coronavirus lockdown. For Boris Johnson, for so long the king of the sing-it-then-wing-it school of politics, it sounded particularly downbeat.

To Johnson’s critics, there’s been little hope and even less of a plan over the past few weeks. As well as a dire death toll and shortages of tests and protective equipment, their list of his failures now includes the newly chaotic public health messaging. Replacing the brutally effective ‘Stay Home’ mantra with the more confusing ‘Stay Alert’ alternative is seen by some as another faux pax, another blunder from the blunderbuss in No.10.

The new doubt sown in the public mind was evident at the Downing Street press conference when citizen questioners complained the new message was too “vague”. Could they see their mum and dad or just one of them? In the park or their garden? (The answer, despite some riffing from Dominic Raab, was one and not in their garden). When even Philip Schofield declares on prime time TV that the government is starting to “arse it up”, you know something’s slightly amiss with your comms.

Johnson does have a plan, however, and one that he hopes will give hope too. His roadmap, ‘Our Plan To Rebuild’ is shot through with carefully judicious conditionality. It’s also a reminder that the best laid plans often go awry. It links to the original March 3 ‘Action Plan’ that some people now view as an inaction plan on issues like the speed of the lockdown and the UK’s testing capacity. ‘Contain, delay, research and mitigate’ all seem like an age ago, technical terms rapidly swamped by the virus and the lockdown itself.

As ever, the PM is often his own worst enemy. The man who returned from his own brush with the illness to tell the nation to “contain your impatience” turned out to be the one whose impatience was the real cause of the comms errors of recent days.‌

If he hadn’t blurted out during last week’s PMQs that by this Monday the lockdown would start easing (and therefore avoided a detail-free Sunday night TV address), his PR problems would have been lessened. If he had decided to first make a statement to parliament today, followed by a TV address tonight, setting out how from this Wednesday some changes would begin (all backed up with detailed papers on everything from transport to schools to workplaces), he could even have won praise for a methodical, cautious approach.

Indeed in some ways, the real question is why many of these plans weren’t announced weeks ago. As the PM himself points out, construction and manufacturing workers (indeed anyone who can’t feasibly work from home) have been allowed to work since day one of lockdown.

So why has it taken this long to come up with rules or guidance on how to keep their workplaces safe? Why did it take so long to recognise that letting people sit on their own on a park bench (no, it’s not ‘exercise’ but it is great for their mental health) would not endanger anyone else? Why so long to work out that face coverings may help on transport or small shops?

The more important changes are set for June and July, with schools and key sectors of the economy in line for tentative returns. The government’s approach of phases and pilots to test things out makes eminent sense, as does its willingness to reimpose stricter measures if there are any spikes in local areas.

Of course, any change to the Stay Home messaging would be fraught with difficulty for any government. The nuance and complexity of all those phases and pilot schemes don’t easily fit into one slogan. ‘Stay Safe, Save Lives’ may have been slightly better, or ‘Stay Cautious, Save Lives’ (the new French motto which was curiously equated by the PM with his own ‘Stay Alert’ effort). The PM told MPs today “I think ‘Stay Alert’ is a valid piece of advice, and indeed so is ‘Stay At Home If You Can’.”

And despite, or perhaps because of, the kicking he has got in recent days, Johnson is once again displaying his political modus operandi of nicking the best of his opponents’ policies and discarding the worst. The man who once ridiculed ‘elf n safety’ as a Telegraph columnist, today set out plans to make every workplace ‘Covid-Secure’, with £14m for more staff for the Health and Safety Executive to make spotchecks. Bad bosses won’t be allowed to “get away with” “forcing” people into unsafe workplaces, he vowed.‌

When Johnson again said that “one of the differences between this crisis and 2008 is we really want to look after working people”, that was a political threat to Labour as potentially dangerous as all those red wall Brexit seats turning blue last year.

He could even perhaps take up the idea of the centre-right think tank the Social Market Foundation for a new work-and-training guarantee programme. This would ensure anyone who cannot find a conventional job is paid by the state in the new ‘green jobs’ industry. Un-Tory? Maybe. UnJohnsonian? Not necessarily. The spectre of mass unemployment is certainly what keeps many Tory MPs in marginal seats up at night.

Keir Starmer is a wily opponent though. He was the one who demanded a national standard for workplace safety, and also the one who raised the issue of a lack of childcare for those now expected to go back to work. His prime time BBC address was the product of some clever research by his team, who dug into the BBC Charter to find the precedent of Hugh Gaitskell delivering a response to the Suez crisis.

That BBC address played to Starmer’s strengths too, with neat lines again linking the WW2 generation and the care homes they now live (and die) in, and the way care workers are treated like heroes but paid less than the living wage.

And Starmer is capable of a bit of political cross-dressing of his own too, and not just by reclaiming veterans’ patriotism. On China, Starmer is already sounding more hawkish, and on the need for a home-grown industrial strategy. He has already attacked Johnson for failing to get tougher on overseas arrivals at our ports and airports earlier in the Covid crisis.

On getting Britain back to work during Covid-19, the Labour leader is following the example of the best trade unions. For years, pragmatic unions reps have negotiated furloughs or shorter working hours as a better option than redundancies in factories. During this crisis, it was shopworkers union Usdaw which actually led the way in negotiating new safe working in supermarkets.

Starmer has shown he is a politician as much as a lawyer of late. He has shown, to coin a phrase, that he likes to have his cake and eat it - sounding ever-so-constructive while being quietly destructive of the PM’s competence.

There is still more ammunition for him in the language used by some Tories, of “zombie jobs”, of “weaning” those on furlough “off the drug” of state aid, all of which sounds like a party that still doesn’t get how precarious life is for those earning modest wages. Those on furlough are after all those most likely to get the sack once that Treasury help disappears. The PM’s own ill-advised line on Sunday that the UK “can be stronger and better than ever before” - in the wake of more than 30,000 deaths - sounded like some sub-Nietzsche nonsense (what doesn’t kill me makes me stronger?) that could leave a nasty taste in the mouths of the bereaved.

Starmer can rightly say Covid-19 has exposed the care sector crisis, (one spin-too-far in today’s document was the line that “the government will continue to bolster the UK’s social care sector”) as much as it has exposed the digital divide in schools and the health inequalities among different classes and races. He can also argue that far from fixing the roof while the sun shone, the Tories neglect of public services in the past decade is now why there’s a rainstorm of pain from this virus. No wonder the PM has finally drafted a plan. It will take a lot more than hope to get down his mountain path unscathed.

Boris Johnson in the foreword to his new Covid-19 plan

The prime minister said he was not expecting a “flood” of people going back to work this week despite his tweaks to the lockdown.

The Office of National Statistics estimated that 136,000 people in England were currently infected with COVID-19.

Sir Patrick Vallance said there was no guarantee of a vaccine for Covid-19 but said that he would “be surprised if we didn’t end up with something” like a drug treatment or a vaccine.

People in England should now aim to wear face coverings on public transport and in some shops, the government said.

The latest round of talks between the UK and EU over a post-Brexit trade deal began.